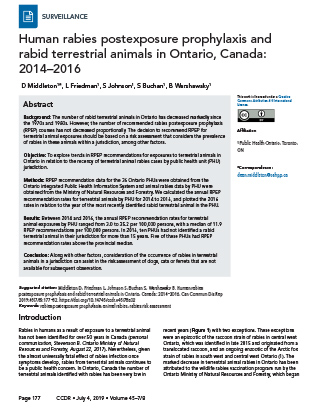 Background: The number of rabid terrestrial animals in Ontario has decreased markedly since the 1970s and 1980s. However, the number of recommended rabies postexposure prophylaxis (RPEP) courses has not decreased proportionally. The decision to recommend RPEP for terrestrial animal exposures should be based on a risk assessment that considers the prevalence of rabies in these animals within a jurisdiction, among other factors.

Methods: RPEP recommendation data for the 36 Ontario PHUs were obtained from the Ontario integrated Public Health Information System and animal rabies data by PHU were obtained from the Ministry of Natural Resources and Forestry. We calculated the annual RPEP recommendation rates for terrestrial animals by PHU for 2014 to 2016, and plotted the 2016 rates in relation to the year of the most recently identified rabid terrestrial animal in the PHU.

Conclusion: Along with other factors, consideration of the occurrence of rabies in terrestrial animals in a jurisdiction can assist in the risk assessment of dogs, cats or ferrets that are not available for subsequent observation.

Rabies in humans as a result of exposure to a terrestrial animal has not been identified for over 50 years in Canada (personal communication, Stevenson B. Ontario Ministry of Natural Resources and Forestry, August 22, 2017). Nevertheless, given the almost universally fatal effect of rabies infection once symptoms develop, rabies from terrestrial animals continues to be a public health concern. In Ontario, Canada the number of terrestrial animals identified with rabies has been very low in recent years (Figure 1) with two exceptions. These exceptions were an epizootic of the raccoon strain of rabies in central west Ontario, which was identified in late 2015 and originated from a translocated raccoon, and an ongoing enzootic of the Arctic fox strain of rabies in south west and central west OntarioFootnote 1. The marked decrease in terrestrial animal rabies in Ontario has been attributed to the wildlife rabies vaccination program run by the Ontario Ministry of Natural Resources and Forestry, which began in 1989. As an additional measure to prevent human rabies cases in Ontario, rabies postexposure prophylaxis (RPEP) is publicly funded and readily availableFootnote 2.

Despite the rarity of human rabies cases in Ontario, and the marked decrease in numbers of rabid terrestrial animals, the annual number of recommended RPEP courses has not decreased proportionallyFootnote 4Footnote 5Footnote 6 (Figure 2). Administering RPEP when not indicated incurs the risk of adverse events as well as costs without benefit. One study, in the context of very low incidence of animal rabies cases, calculated that the risk of mortality from an automobile accident en route to receiving RPEP was greater than the risk of mortality from rabiesFootnote 7.

According to the Ontario Rabies Prevention and Control Protocol, the decision to recommend RPEP for terrestrial animal exposures should be based on a risk assessment that considers a number of factors including the prevalence of rabies in these animals within a jurisdictionFootnote 8Footnote 9. Staff at the 35 public health units (PHUs) in Ontario (36 before May 1, 2018) conduct a risk assessment after a person is exposed to an animal that could carry rabies, although ultimately the health care provider decides whether to recommend RPEP. When a dog, cat or ferret bites or scratches a person, the animal is placed under observation for 10 days by the PHU. If the animal is healthy at the end of the 10-day postexposure period, it is considered not capable of having transmitting rabies at the time of the exposure. In such cases, RPEP is not indicated.

Prior to 2013, Canadian and Ontario guidelines recommended RPEP in all instances when the dog, cat or ferret was not available for a 10-day observation period. In 2013, the guidelines were updated to recommend conducting a risk assessment to determine if RPEP is indicated after exposure to the animal. Elements of the risk assessment for a terrestrial animal that is not available for observation include the type of exposure (i.e. bite, non-bite), the anatomical location of the exposure, the risk of rabies in the animal species involved, the presence of rabies in the area where the incident occurred, and the exposure circumstances (i.e. provoked or unprovoked exposures), as well as the reliability of the injured person’s historyFootnote 8Footnote 10Footnote 11.

In Ontario, incidents involving exposure to a potentially rabid animal for which RPEP is recommended (regardless of whether it is administered or not) are entered into the integrated Public Health Information System (iPHIS) by the PHU where the client residesFootnote 12. In iPHIS, PHUs are prompted to populate a number of fields with details relating to the incident. These include information about the individual exposed, the circumstances of the exposure, the animal (including whether it is available for observation and its vaccination status, if known), and if RPEP is recommended. An open-text comment section allows adding more details about the case.

iPHIS RPEP data for 2014 to 2016 were extracted on November 14, 2017. Only records with RPEP recommendations for terrestrial animal exposures that occurred in Ontario were included in the analyses. These included exposures to Ontario species that are known rabies reservoirs (i.e. raccoons, foxes and skunks) and bridge vectors (i.e. dogs, cats and livestock, including cattle, horses, sheep, goats and llamas). Excluded were records for exposures that occurred outside of Ontario; to animal species that were not terrestrial animals; or to animal species listed as “unknown” unless details in the comments section indicated that these were terrestrial animals and did not indicate the exposure occurred outside of Ontario.

Population estimates for each PHU from 2014 to 2016 were obtained from IntelliHEALTH OntarioFootnote 13Footnote 14.

RPEP recommendation rates by PHU were calculated for the years 2014 to 2016. We used each PHU’s annual RPEP data for exposures to terrestrial animals as the numerator and the population estimate for that PHU as the denominator, and graphed the results.

The number of years since the last rabid terrestrial animal was identified in each PHU relative to 2016 was also calculated. PHUs were categorized into one of the following five year intervals according to most recent report of a rabid terrestrial animal: 2016 or four preceding years, 6–10 preceding years, 11–15 preceding years and more than 15 preceding years. We graphed 2016 RPEP recommendation rates for exposures to terrestrial animals by PHU, classifying each PHU by their category with respect to the number of years since the last terrestrial rabid animal was identified in that PHU area relative to 2016. Microsoft Excel [version 2010; Microsoft Corporation, Redmond, Washington, United States (US)] was used to analyse the data and generate graphs. Mapping and spatial data preparation of these data were performed using ArcMap (version 10.3; ESRI, Redlands, California, US) geographic information systems (GIS) software.

In 2016, ten PHUs had not identified a rabid terrestrial animal in their jurisdiction for more than 15 years (Figure 4). Five of these PHUs had RPEP recommendation rates above the provincial median. Two other PHUs, neither of which had identified a rabid terrestrial animal within the previous 11–15 years, also had RPEP rates above the median (Figure 5).

Since approximately the year 2000, the number of RPEP courses recommended in Ontario has been high compared to the number of rabid animals, even considering the epizootic in central west Ontario that was identified in late 2015 (Figure 2). Since 2013, risk assessments to determine the need for RPEP have been recommended if a person is exposed to dogs, cats or ferrets that are not available for subsequent observation. Implementation of a risk assessment can potentially optimize the number of courses of RPEP recommended by PHUs, particularly in those PHUs with no recent rabid terrestrial animals.

The 2014–2016 annual RPEP recommendation rates for exposures to terrestrial animals in Ontario varied markedly between PHUs, from 3.0 to 35.2 per 100,000 persons. However, in general, each PHU’s annual RPEP rate remained relatively consistent over the three study years. A PHU’s RPEP rate may be influenced by a number of factors, including the likelihood of human exposures to potentially rabid animals, the likelihood of these exposures being reported to the PHU, and the risk assessment performed by the PHU in consultation with the health care provider. Data are not available to assess the likelihood of exposure to potentially rabid animals by PHU, or the likelihood of reporting these exposures, or how the risk assessment was conducted. Nevertheless, data on confirmed cases of rabid animals within a PHU’s jurisdiction, an important factor to consider when conducting a risk assessment, are available. Our analysis found that the recency of the last rabid terrestrial animal did not seem to be associated with the respective RPEP recommendation rates by PHU. Five PHUs had RPEP rates for terrestrial animals above the provincial median despite not reporting a rabid terrestrial animal in more than 15 years.

The possibility that rabies may arise from sources outside the PHU’s jurisdiction, because of incursions of rabid animals from adjacent areas, translocated rabid animals or adoption of rabid animals, may influence the decision to recommend RPEP, even though these events are infrequent. Incursions from adjacent areas as a possible source of introduction of terrestrial rabies only applies to PHUs that border another province or the US. An epizootic of raccoon rabies from incursion from adjacent areas in the US has not occurred in Ontario for more than 10 years and has never been demonstrated to have originated from neighbouring provincesFootnote 15. Four of the five PHUs that had not experienced a rabid animal in their jurisdiction for more than 15 years and had RPEP recommendation rates above the median rate did not share a land border with the US.

Translocation of an imported rabid animal that results in an unrecognized epizootic is a concern. In recent years, there has been one recognized instance of translocation of a “hitch-hiking” raccoon that resulted in the current epizootic in central west OntarioFootnote 15. Adoption of a domestic animal with rabies has only been reported once in Ontario in recent years, when a puppy was transported from rural Ontario to a flea market in Toronto in 2008. The situation was quickly recognized and the large number of people exposed to the puppy were appropriately managed. In order to protect against rabies, dogs and cats more than three months old that are imported into Canada must be vaccinated (with minor exceptions)Footnote 16Footnote 17, although on occasion, records have been falsifiedFootnote 18Footnote 19Footnote 20Footnote 21.

There are a number of limitations in our analyses by PHU. As previously mentioned, we cannot assess other factors that may affect RPEP rates, such as the extent of human exposure to terrestrial animals and subsequent reporting to PHUs. PHUs frequently do not enter information on RPEP recommendations when it is not actually administered. Further, it is possible that the exposure occurred outside of the PHU’s geographical boundary. With regard to rabid terrestrial animals, the data are limited by the extent of surveillance in the particular geographic area. In general, animals are tested for rabies when there has been a potential human exposure or during epizootics. It is therefore possible that rabid terrestrial animals in a PHU jurisdiction may be missed.

An additional limitation is that our analysis considered the timing of the last rabid terrestrial animal but did not consider the incidence rates at the time of that last rabid animal (i.e. it did not consider if there was one rabid animal versus multiple rabid animals) and we did not incorporate the recency of terrestrial animal rabies in adjacent PHUs into the analysis, both of which are factors that may impact the risk assessment.

Human rabies acquired from terrestrial animals has not occurred for more than 50 years in Canada. Canadian and Ontario guidelines recommend a risk assessment be conducted when a person is bitten or scratched by a dog, cat or ferret that is not available for a subsequent 10-day observation period. Consideration of the timing of the most recent rabid terrestrial animal in the geographic area is an important factor in determining the need for RPEP in the risk assessment.

Canadian Food Inspection Agency. Importing or travelling with domestic cats - three months of age or older from countries recognized by Canada as being rabies-free. Ottawa: Government of Canada. http://www.inspection.gc.ca/animals/terrestrial-animals/imports/policies/live-animals/pets/cats/rabies-free/eng/1364954808466/1364954913271