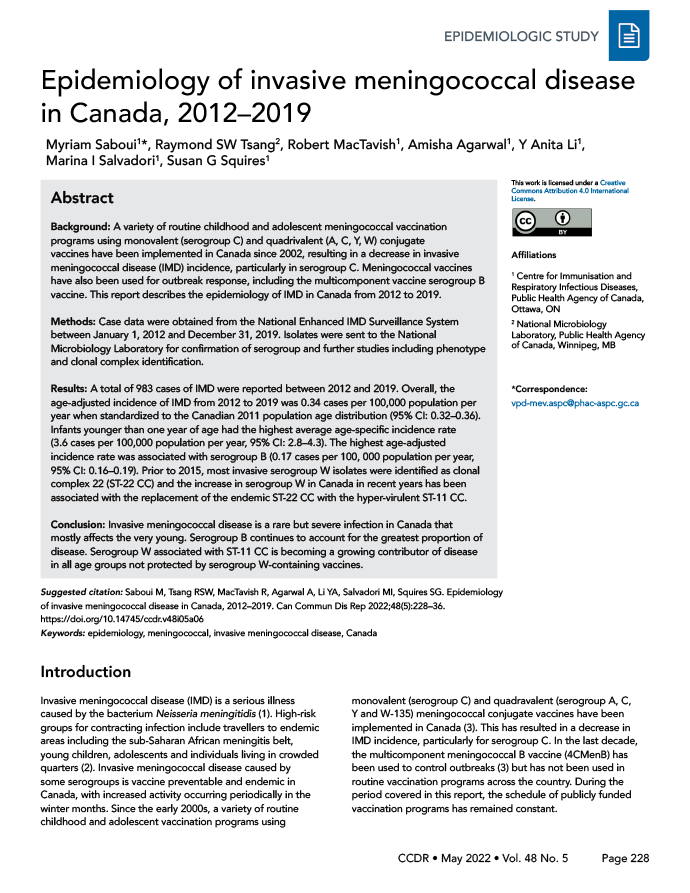 Download this article as a PDF
Published by: The Public Health Agency of Canada
Issue: Volume 48-5, May 2022: Vector-Borne Infections–Part 1: Ticks & Mosquitoes
Date published: May 2022
ISSN: 1481-8531
Subscribe to CCDR

Background: A variety of routine childhood and adolescent meningococcal vaccination programs using monovalent (serogroup C) and quadrivalent (A, C, Y, W) conjugate vaccines have been implemented in Canada since 2002, resulting in a decrease in invasive meningococcal disease (IMD) incidence, particularly in serogroup C. Meningococcal vaccines have also been used for outbreak response, including the multicomponent vaccine serogroup B vaccine. This report describes the epidemiology of IMD in Canada from 2012 to 2019.

Methods: Case data were obtained from the National Enhanced IMD Surveillance System between January 1, 2012 and December 31, 2019. Isolates were sent to the National Microbiology Laboratory for confirmation of serogroup and further studies including phenotype and clonal complex identification.

Conclusion: Invasive meningococcal disease is a rare but severe infection in Canada that mostly affects the very young. Serogroup B continues to account for the greatest proportion of disease. Serogroup W associated with ST-11 CC is becoming a growing contributor of disease in all age groups not protected by serogroup W-containing vaccines.

Invasive meningococcal disease (IMD) is a serious illness caused by the bacterium Neisseria meningitidisFootnote 1. High-risk groups for contracting infection include travellers to endemic areas including the sub-Saharan African meningitis belt, young children, adolescents and individuals living in crowded quartersFootnote 2. Invasive meningococcal disease caused by some serogroups is vaccine preventable and endemic in Canada, with increased activity occurring periodically in the winter months. Since the early 2000s, a variety of routine childhood and adolescent vaccination programs using monovalent (serogroup C) and quadravalent (serogroup A, C, Y and W-135) meningococcal conjugate vaccines have been implemented in CanadaFootnote 3. This has resulted in a decrease in IMD incidence, particularly for serogroup C. In the last decade, the multicomponent meningococcal B vaccine (4CMenB) has been used to control outbreaksFootnote 3 but has not been used in routine vaccination programs across the country. During the period covered in this report, the schedule of publicly funded vaccination programs has remained constant.

The last national IMD surveillance report described the epidemiology of IMD in Canada from 2006 to 2011. This article focuses on recent IMD data from 2012 to 2019 and explores trends over time, seasonality, spatial distribution and clinical presentation of cases and mortality.

National enhanced case-based surveillance has been conducted in Canada since 1995 through the Public Health Agency of Canada's Enhanced Invasive Meningococcal Disease Surveillance System (eIMDSS). Provincial and territorial health departments voluntarily reported non-nominal epidemiologic data on confirmed IMD cases on an annual basis. Deterministic matching was conducted to retrospectively link epidemiologic and laboratory data. This article is based on IMD data extracted from eIMDSS, with disease onset between January 1, 2012, and December 31, 2019. See Annex for the national case definition.

Isolates were routinely sent to the National Microbiology Laboratory (NML) for confirmation of serogroup and further strain characterization. Serogrouping was done by bacterial agglutination test and confirmed by polymerase chain reaction (PCR) when necessary; serosubtypes of isolates were determined by whole cell enzyme-linked immunosorbent assay using monoclonal antibodies, while clonal analysis was done by multi-locus sequence typing as previously describedFootnote 4.

The demographic, temporal and spatial distribution of IMD cases were examined, in addition to case manifestation, vaccination history, disease outcome and isolate characteristics. Incidence rates were calculated per 100,000 population using annual July 1st population estimates by province/territory, age and sex, which were obtained from Statistics CanadaFootnote 5. The direct method was used for calculating age-standardized rates based on the 2011 Canadian census. Cases with missing age were excluded from the age standardization and all age-related analyses. Confidence intervals (CIs) for incidence rates were calculated at the 95% confidence level. The CIs of age-standardized rates were calculated according to the method based on the gamma distribution. All analyses were conducted using Microsoft Excel 2010, SAS 9.4, and R version 4.0.2 (R Foundation for Statistical Computing, Vienna, Austria).

Data on month of onset were reported for 930 cases (95% of total sample). Overall, the fall and winter months accounted for the majority of cases (60%). Peaks of IMD onset were observed in the months of December/January (22%), March (12%) and October (10%). The summer months (July and August) were characterized by low IMD activity, with only 11% of all cases reported during the summer.

Prior to 2015, most invasive serogroup W isolates were identified as ST-22 CC and the increase in serogroup W in Canada in recent years was associated with the replacement of the endemic ST-22 CC with the hyper-virulent ST-11 CCFootnote 6. They were characterized by the antigenic formula of W:2a:P1.5,2 with most typed as ST-11 and of the sub-lineage 11.1Footnote 7.

Since the implementation of publicly funded meningococcal C and meningococcal quadrivalent vaccination programs in Canada, the overall incidence of IMD has decreased significantly. Over the surveillance period, vaccination coverage for the meningococcal conjugate C vaccine has remained stable in children under two years of age, ranging from 87.6% to 88.7% between 2013 and 2017Footnote 8.

The downward trend in incidence was noted across all Canadian regions as early as the year following implementation of publicly funded programs. Between 2012 and 2019, the Prairies and Central regions reached an all-time low incidence rate. Consistent with the previous surveillance report, Nunavut continued to report the highest incidence rateFootnote 9. The overall mean incidence in the previously published surveillance report was 0.58 cases per 100,000 population for 2006–2011 compared with 0.34 cases per 100,000 population for 2012–2019Footnote 6. Serogroup B accounted for the largest proportion of cases, and disproportionately affected infants under the age of one year. Similar to previously published reports, cases of IMD predominated in the winter months with the highest levels in January and MarchFootnote 4Footnote 10.

During the time period 2012–2019, there were three documented Canadian outbreaksFootnote 14. One outbreak spanned from 2006 to 2013 in the region of Saguenay-Lac-Saint-Jean, Québec, and was due to serogroup B. A vaccination campaign was launched the following year in the region using the 4CMENB vaccineFootnote 15. The incidence of IMD due to serogroup B fell dramatically in the targeted population of the vaccination campaign (up to 20 years of age) and in 2015, an outbreak was reported in a university in Nova ScotiaFootnote 14. The first documented outbreak due to serogroup CC-11 was reported in British Columbia in 2017 and resulted in five cases in adolescents aged 15–19 yearsFootnote 14.

Antibiotic resistant N. meningitidis was recently observed in some serogroup Y isolates that belonged to ST-3587 (ST-23 CC) clone and was characterized by the production of β-lactamase due to presence of the blaROB-1 gene likely to be acquired from Haemophilus influenzaeFootnote 16. This strain has also been identified in FranceFootnote 17 and in the United States, which led to the release of a health alert in June 2020Footnote 16. In the United States, this strain has also acquired resistance to ciprofloxacin, an antibiotic commonly used for chemoprophylaxis of close contacts of IMD casesFootnote 18. Up to now, the expansion and spread of this clone has not been observed in Canada (unpublished data, NML).

Laboratory surveillance is important for the identification of novel strains that may contribute to the evolving nature of IMD. For example, the novel South American-United Kingdom strain of ST-11 serogroup W has been responsible for the increase in meningococcal W disease globally and has led to reports of unusual clinical presentationsFootnote 7Footnote 19Footnote 20. The recent increase in meningococcal C disease in the African meningitis belt was due to a new strain that arose when a ST-10217 non-encapsulated strain from a healthy carrier in Burkina Faso acquired a serogroup C capsuleFootnote 21. The recent emergence in the United States of β-lactamase positive serogroup Y N. meningitidis with additional resistance to fluoroquinolones has important implications for treatment and chemoprophylaxis of IMDFootnote 22.

Imported cases via travel accounted for a small proportion of cases, and the majority of cases due to travel were within Canada or the United States. Laboratory characterization of strains identified two potential imported cases with unusual characteristics of C:NT:P1.14, ST-4821 and resistance to ciprofloxacin. These strain characteristics have not been found in any Canadian isolates previously but were commonly associated with a unique serogroup C clone in ChinaFootnote 4, which suggested that these two isolates were from imported cases.

Serogroup B accounted for the largest proportions of clinical presentations. Between 2012 and 2019, the mortality rate associated with IMD continued to decline over time and serogroup B accounted for the majority of deaths. The trends observed in this report are consistent with evidence from other publicationsFootnote 6. Mortality rates in Canada were comparable to those of Australia and EnglandFootnote 7Footnote 13. Positive specimens from blood resulted in nearly double the mortality ratio when compared with positive specimens from cerebrospinal fluid. This finding was statistically significant.

In recent years, evidence of atypical clinical presentation of IMD serogroup W characterized by gastrointestinal symptoms has been reported across the worldFootnote 23Footnote 24Footnote 25Footnote 26. Among the cases reported with other clinical manifestations in Canada between 2012 and 2019, the majority were associated with serogroup W-135. Heightened surveillance of atypical presentations in Canada is recommended to better understand the evolving epidemiology of IMD.

The World Health Organization established a plan to defeat meningitis by 2030Footnote 27. The plan includes three main goals pertaining to epidemics, disease transmission and disabilities and long-term effects of infection: 1) the elimination of IMD epidemics; 2) the reduction of cases and deaths from vaccine preventable bacterial meningitis; and 3) the reduction of disability associated with infections. Although IMD remains endemic in Canada, evidence from this article shows noteworthy reductions in incidence rates in some geographic areas in Canada. The introduction of publicly funded vaccination programs in Canada has sharply decreased the incidence of IMD associated with strains covered by the vaccines. New strains of IMD will continue to pose challenges for disease target reductions such as the ones outlined by the World Health Organization. Canada has a strong public health infrastructure that allows for early detection of cases and the implementation of prompt public health actions; however, the current routine surveillance at the national level does not collect data on cases post-infection, such as long-term disabilities.

Several limitations should be noted. First, data reported to the eIMDSS surveillance system are not epidemiologically linked with laboratory data. To connect the two data sources, deterministic matching was done. Some cases may have been missed due to insufficient data to match the two data sources. Second, many cases might not be recognized, as antibiotics are frequently given prior to taking cultures and the organism would not be identified. Third, certain data variables, such as immunization history, were often missing or incomplete. Finally, limited outbreak information represents a gap in national IMD surveillance.

Invasive meningococcal disease is a rare but severe infection that continues to affect the very young population in Canada. While serogroup B continues to account for the greatest proportion of disease, serogroup W associated with CC-11 is becoming a growing contributor of disease in older adults. The evolving nature of N. meningitidis requires a comprehensive approach to its surveillance, which should include a laboratory component that documents strain characteristics.

The authors acknowledge the Canadian provinces and territories for providing data to the Enhanced Invasive Meningococcal Surveillance System and for providing their input to this report.

National Advisory Committee on Immunization. The Recommended Use of the Multicomponent Meningococcal B (4CMenB) Vaccine in Canada. NACI; (updated 2014; accessed 2022-01-16). https://www.canada.ca/en/public-health/services/immunization/national-advisory-committee-on-immunization-naci/recommended-use-multicomponent-meningococcal-b-4cmenb-vaccine-canada.html#toc_4a

Clinical evidence of invasive disease with laboratory confirmation of infection:

Clinical evidence of invasive disease with purpura fulminans or petechiae, with no other apparent cause and with non-confirmatory laboratory evidence:

Clinical illness associated with invasive meningococcal disease usually manifests itself as meningitis and/or septicaemia, although other manifestations may be observed (e.g. orbital cellulitis, septic arthritis). Invasive disease may progress rapidly to petechiae or purpura fulminans, shock and death.

Both confirmed and probable cases of disease should be notified as of January 1, 2006.