Introduction: Mapping Connections: An understanding of neurological conditions in Canada

Neurological diseases, disorders, and injuries, referred to collectively as neurological conditions, have been estimated to affect 3.6 million Canadians living in the community and a further 170,000 Canadians living in long-term care facilities.Footnote 2 The existence of a neurological condition affects not only the individual living with the condition, but also family members and caregivers both within and outside the health care system, thereby increasing the number of Canadians touched by these conditions.

Canadians living with a neurological condition – whether severe or mild, progressive or non-progressive, uncontrolled or controlled – face unique challenges and have specific needs. Symptoms related to these conditions can include paralyzed or weakened muscles, impaired coordination, loss of sensation, seizures, confusion, pain, and altered memory and capacity to think. Neurological conditions can often have an impact on the general physical and mental health of those affected, as well as their relationships with others, capacity to work, and ability to socialize. In the case of children with a neurological condition, their life paths may be altered significantly.

Neurological conditions can occur in individuals of all age groups. Certain conditions that affect the brain, spinal cord, or peripheral nervous system have an onset during infancy or childhood, while others present during adulthood. The prevalence and incidence of some of the most common neurological conditions tend to increase with age.

The aging of the Canadian population

Over a 20-year period from 2011 to 2031, the Canadian population is projected to grow to more than 40 million people. A shift in the population age structure will result in an increase in the number of Canadians age 65 years and older; this proportion will rise from 15% in 2011 to close to one quarter (23%) by 2031 (Figure I-1).Footnote 3  Since the incidence of some of the more common neurological conditions increases with age, as our population ages and grows, both the number of individuals facing the challenges associated with neurological conditions and the cost of caring for these individuals are expected to rise. This burden on health and disability, as well as the need for informal caregiving by families and friends, will result in economic consequences to individuals, caregivers, and the health care system. 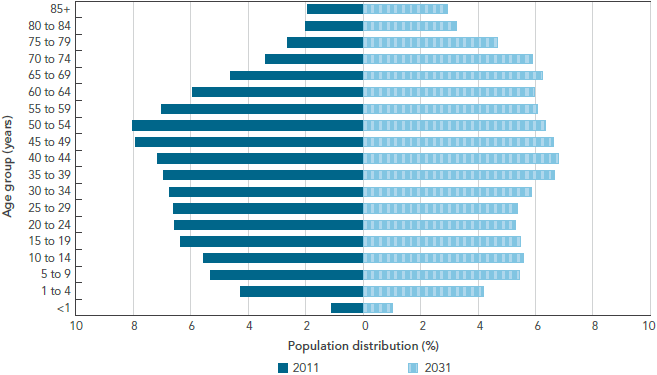 The National Population Health Study of Neurological Conditions (the 'Study') was jointly planned and initiated in 2009 through a unique partnership between Neurological Health Charities Canada (NHCC), the Public Health Agency of Canada (the 'Agency'), Health Canada, and the Canadian Institutes of Health Research (CIHR). This Study was designed to: enhance understanding of the scope of targeted neurological conditions in Canada and their impacts on affected individuals, families, and the health care system; support the development of effective programs and services; and reduce the burden of neurological conditions in Canada.

After receiving advice from advisory groups comprised of over 50 experts from the Canadian neurological research community, and with consideration to both the potential population disease burden and key knowledge gaps, the Study was designed to investigate neurological conditions across four focus areas:

With a commitment of $15 million over four years (2009 to 2013), thirteen research projects were funded, along with three national surveys (see Appendix 1 for descriptions). In addition, a set of seven microsimulation models was developed by the Agency with Statistics Canada to project the health outcomes and costs of selected neurological conditions. Finally, the Agency's Canadian Chronic Disease Surveillance System (CCDSS) was expanded to use provincial and territorial health administrative data for the surveillance of selected neurological conditions.

A set of seven microsimulation models, POHEM-Neurological, was developed to project the health outcomes and costs in Canada associated with some of the more common neurological conditions over the next 20 years: Alzheimer’s disease and other dementias, cerebral palsy, epilepsy, multiple sclerosis, Parkinson’s disease/parkinsonism, hospitalized traumatic brain injury, and hospitalized traumatic spinal cord injury. In addition to other data, these models were based on new research findings from the Study itself. Each model accounted for changes in the Canadian population from births, immigration, emigration, and aging, but not for changes in risk factors or in the prevention, diagnosis, treatment, or management of neurological conditions.

Microsimulation is an increasingly important tool for linking evidence to health policy. Such models can be used to explore ‘what if’ scenarios, comparing alternative interventions in terms of their costs and the outcomes obtained (including changes in patterns of health services utilization, employment, and quality of life). The development of POHEM-Neurological was a significant scientific contribution as these are the most comprehensive models of this type yet to be developed in Canada. However, interpretation of projected epidemiological, health, and economic trends should consider the uncertainty inherent in extending current (status quo) data into the future. Common to all models, inputs and assumptions require updating to reflect changing conditions and to take into consideration new knowledge as understanding of these conditions evolves. Also, future users could develop the models to simulate the impact of changes in modifiable risk factors or in the influence of prevention strategies, early intervention, treatment, and rehabilitation.

At the onset, 14 diseases, disorders, and injuries of the brain, spinal cord, and peripheral nervous system were selected as part of the Study (Table I-1).Footnote 7 While some research projects and components of the Study focused on subsets or broader groupings of these conditions, others expanded their scope to include additional conditions such as migraine, spinal cord tumour, Rett syndrome, and stroke (Appendix 1; Table A-1). Taking into consideration the varying focus on individual conditions, in addition to certain data limitations (especially for less common conditions), it was not always possible to provide uniform coverage of each neurological condition under study in this report.

This report describes key findings of the Study, which were identified during a comprehensive synthesis process managed by the Study Implementation Committee that focused on reports prepared by a Scientific Advisory Committee and Synthesis Panel (Appendices 4 to 6). After content review by the Scientific Advisory Committee, the Synthesis Panel reviewed each project and highlighted key findings, knowledge gaps, and main themes in relation to the four focus areas of the Study. In this report, each study component (project or survey) is referred to by its 'short title' or '[reference number]' identified in Appendix 1. Given the vast extent of the issues and topics covered in the Study, this report only attempts to provide a high level overview of the findings from the Study's various components.

The first chapter of this report touches upon the wide spectrum of impacts experienced by Canadians living with a neurological condition – men and women, adults and children, and First Nations and Métis individuals. Impacts on informal caregivers are also presented.

Listening to the community

NHCC member organizations, individuals living with neurological conditions, and other stakeholders were consulted by NHCC throughout the duration of the Study. In addition, a comprehensive consultation process brought the neurological community together using face-to-face and virtual meetings, an online survey, and through the creation of a Stakeholder Engagement Panel (Appendix 7), which provided stakeholders with opportunities to share feedback on drafts of this report. These stakeholder perspectives supported the development of the final report that speaks to the perceptions, needs, and experiences of those affected by neurological conditions.

The quotations in this report are from stakeholders who took part in the consultation process or in the Study projects. Their original words and phrases are used, wherever possible.

The human, health service, and economic implications of neurological conditions in Canada constitute strong motivations for an improved understanding of their risk factors. The fourth chapter of this report presents preliminary insights gained by the Study relating to risk factors for neurological conditions, and the remaining challenges associated with the identification of risk factors that are not only supported by statistical evidence but are also relevant from a clinical and public health perspective.

Finally, throughout the report, projections obtained from the microsimulation models are incorporated, to provide insights into the health outcomes and costs of selected neurological conditions in the future. As the understanding of the four focus areas of this Study continues to improve – the impacts (Chapter 1), health service use and needs (Chapter 2), scope (burden) (Chapter 3), and risk factors (Chapter 4) for neurological conditions – governments, health care providers, and stakeholders will have access to a stronger evidence base that can inform policies and the development of strategies that best meet the health and social needs of affected Canadians and their families.

Considering the magnitude of new information generated by this Study, and because this is a field in constant evolution, it was not possible to summarize all the major findings in one report. Therefore, this report aims to provide key findings of clinical and public health relevance, and should be regarded as a guide to help navigation through this new knowledge.

For additional or more detailed information about the findings from the different components of the Study, please visit the NHCC website, the Agency website, or consult the Chronic Disease Infobase.

Please refer to the Microsimulation Project [10] in Appendix 1.

Canadian Institute for Health Information. The burden of neurological diseases, disorders and injuries in Canada. Ottawa (ON): CIHI; 2007. 130 p.

Refer to the Glossary of this report or to the NHCC website (www.mybrainmatters.ca/brain-conditions) for the definitions of these conditions.