Tax evasion. There are consequences.

The Criminal Investigations Program investigates significant cases of tax evasion, fraud and other serious violations of tax laws and where appropriate refers cases to Public Prosecution Service of Canada for criminal prosecution.

The Criminal Investigations Program focuses on the most serious cases that meet one or more of the following criteria:

The CRA works closely with the RCMP, provincial and local police, and other law enforcement agencies on tax cases to crack down on tax cheats and maintain the integrity of the tax system.

The CRA shares knowledge and expertise with domestic and international partners. This information helps to identify new schemes and challenge those who deliberately evade their taxes. Our intelligence gathering capabilities enhances our ability to identify and address global tax evasion.

The CRA also has the necessary tools in place to detect and investigate promoters who are suspected of facilitating tax evasion.

What is tax evasion?

Combatting tax evasion and other financial crimes is important financially and socially. The quality of life that all Canadians enjoy is supported by the taxes we pay. Revenues collected help to fund programs and services such as health care, childcare, education, and infrastructure projects that benefit all Canadians.

What are the consequences of tax evasion?

Tax evasion is a crime. Whether you’re cheating on your taxes here in Canada or hiding assets or money in foreign jurisdictions, the consequences are serious. Tax evasion has a financial cost. Being convicted of tax evasion can also lead to fingerprinting, court imposed fines, jail time, and a criminal record.

When taxpayers are convicted of tax evasion, they must still repay the full amount of taxes owing, plus interest and any civil penalties assessed by the CRA. In addition, the courts may fine them up to 200% of the taxes evaded and impose a jail term of up to five years.

To learn more about the consequences of evading your taxes, watch the video called Criminal Investigations Program – Tax evasion.

What are the different forms of tax evasion?

Have assets outside of Canada?

Canadians are required to report their worldwide income to the CRA and to pay the appropriate taxes on this income. Not reporting income from foreign sources is illegal. Choosing to ignore or not follow tax laws will result in serious consequences, including penalties, court fines, jail time, and a criminal record.

For more information on what happens when you hide assets offshore, watch the video called Criminal Investigations Program – Offshore non-compliance.

Is someone trying to convince you that you don’t have to pay tax on the income you earn? Beware! Some individuals not only fail to report their own earnings, but also conspire, counsel, and promote others to participate in such schemes.

Protect yourself against tax schemes and understand the consequences you might face. To learn more, watch the video called Criminal Investigations Program - Tax protesters.

Some individuals or organizations promote or sell tax arrangements, plans, or schemes that are not legal. They deliberately misrepresent or make false statements involving tax shelters or arrangements to assist clients in evading taxes, all the while obtaining a financial benefit.

The Agency is committed to taking full action against anyone who abuses the tax system. For more information, watch the video called Criminal Investigations Program – Promoters of tax evasion schemes.

The CRA has set up a free subscription service to help Canadian taxpayers stay current on the CRA’s enforcement efforts. Subscribers will receive notifications about CRA enforcement activities, which may include information on convictions and in some instances, the execution of searches and the laying of criminal charges. This service will increase awareness of CRA enforcement actions and warn Canadians about potential fraud schemes.

For more information on the CRA convictions and to subscribe to this service go to Enforcement notifications. 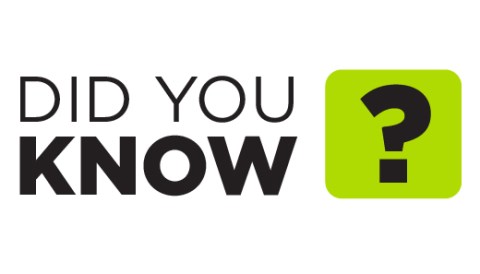 From April 1, 2012 to March 31, 2017, the CRA convicted 408 individuals and businesses. This involved approximately $122 million in federal tax evaded and court sentences totaling $44 million in court fines, and 3103 months in jail.

Between 2006 and 2017, 75 tax scheme promoters from across Canada were successfully convicted of tax offences related to tax schemes. This led to $7.15 million in court imposed fines and a total of 936 months of jail awarded.

On June 13, 2017, over 80 tax investigators from the CRA and the United Kingdom’s tax authority executed searches in both countries as part of an ongoing investigation of an alleged carousel tax fraud scheme against the Government of Canada.

Be aware of your reporting obligations

Are you aware of a situation or do you have information regarding international tax avoidance? To learn more, go to Report offshore tax cheating.

Report suspected tax evasion to the Leads Program. Your identity will not be disclosed and you may provide information anonymously. 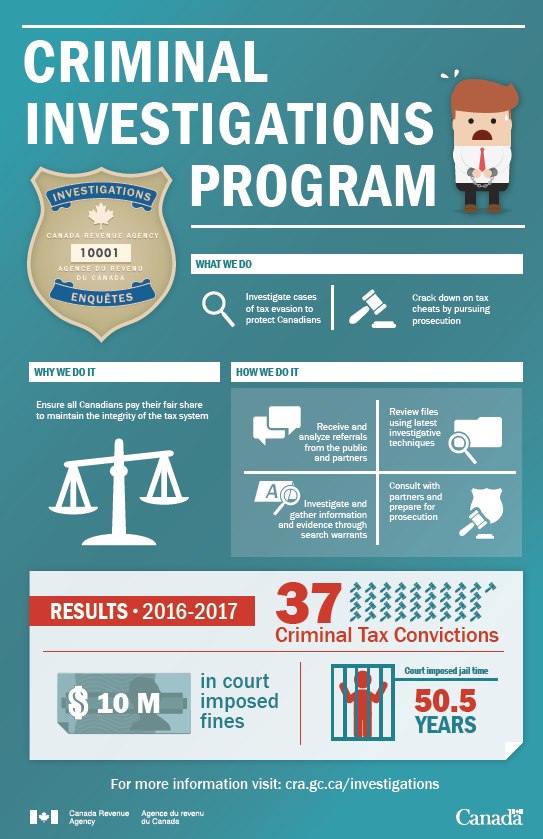