As explained in previous sections, concerted efforts are being made to streamline defence procurement, improve the timely acquisition of much needed military capabilities, and deliver the overall defence capital programme.

National Defence has made notable progress in advancing 333 capital projects in support of Strong, Secure, Engaged — inclusive of the major equipment, information management and information technology, and infrastructure projects included in Defence Investment Plan 2018. As of April 2019, 86 or 26% of the projects are in close-out or have been completed, as shown in Figure 3a. 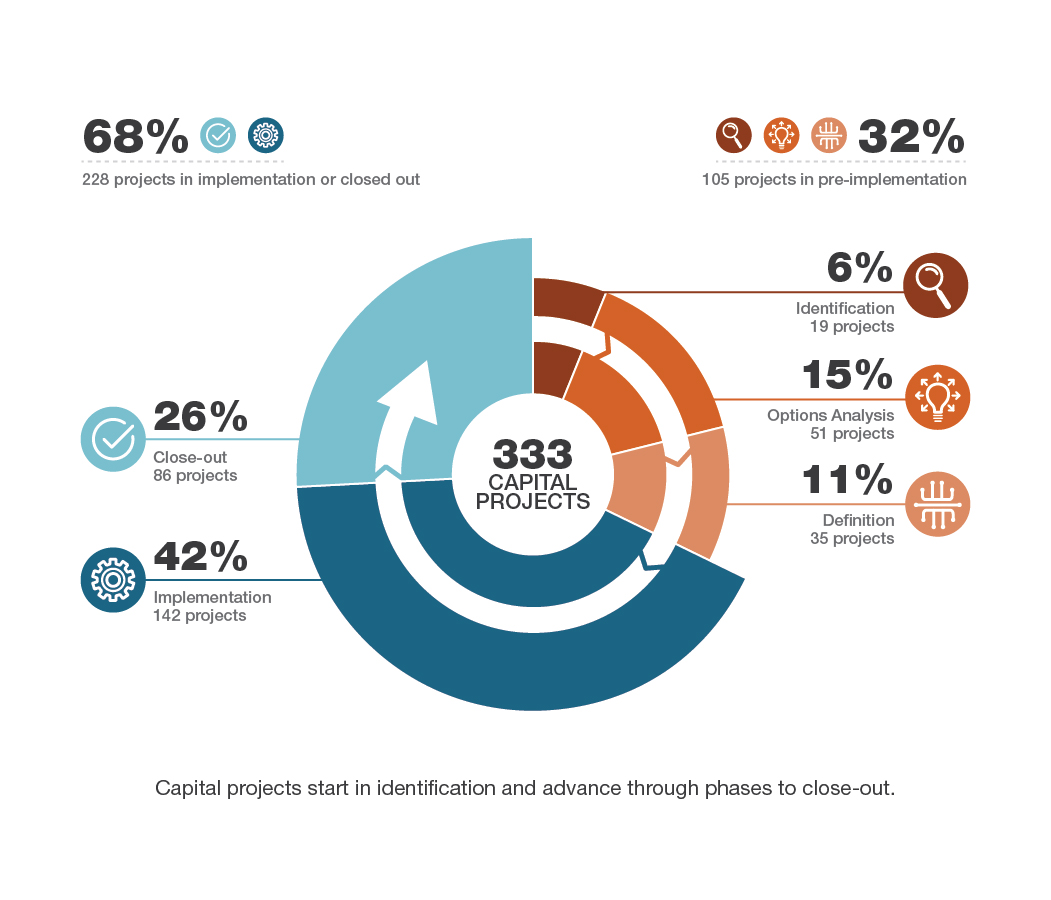 The success of current efforts in that respect is demonstrated by the numbers of projects moving through the project management cycle. Adaptation is essential for any business model, no less the business of defence. Since the launch of Strong, Secure, Engaged, 157 of the 333 capital projects, or 47%, have passed through a significant phase of approval and into a new phase, as shown in Figure 3b.

As highlighted throughout this annual update, National Defence has made steady progress on many major defence projects. Below are several more achievements and milestones from across the Defence Team since the publication of Defence Investment Plan 2018.

Canada will purchase 88 advanced fighter aircraft to contribute to the safety and security of Canadians and to meet Canada’s international obligations. A modern fighter jet fleet is essential for defending Canada and Canadian sovereignty and contributing to NORAD and NATO commitments.

The Future Fighter Capability Project is the most significant investment in the Royal Canadian Air Force in more than 30 years. A draft Request for Proposal (RFP) was released to all eligible suppliers in October 2018. A second draft is now out for feedback. The final RFP will be released in summer 2019.

Aerospace is one of the most innovative and export-driven industries in Canada and adds $28 billion annually in gross domestic product to Canada’s economy. Together, Canada’s aerospace and defence industries contribute over 240,000 jobs.

The Canadian Surface Combatant project is the largest, most complex procurement undertaken by the Government of Canada. In February 2019, the Government of Canada announced it had officially selected the BAE Systems Type 26 Global Combat Ship design for 15 new warships. The design will be further customized to meet Canada's requirements and to incorporate Canadian systems and equipment. Construction is set to begin in the early 2020s.

The Canadian Surface Combatant project creates well-paying stable employment within the defence industry across the country and benefits the economic prosperity of Canada's coasts and waterways.

In order to fulfill immediate needs, the Government of Canada signed a procurement agreement in November 2018 with the Government of Australia for 18 F-18 fighter aircraft (and spare parts). The interim fighter fleet is key to ensuring that the Royal Canadian Air Force can continue to fulfill its missions and meet domestic and international obligations to ensure the safety of Canadians and Canada.

The aircraft are the same type as Canada’s current CF-18 fleet and can therefore be integrated quickly into the fleet. The first two aircraft arrived in Canada in February 2019, and deliveries will continue at regular intervals for 3 years. The aircraft will be employed at 3 Wing Bagotville, Quebec, and 4 Wing Cold Lake, Alberta.

Joint Task Force X (JTF X) provides human intelligence capabilities in support of military operations and is critical to predicting and preventing threats to members of the Canadian Armed Forces on operations. Human intelligence operations include a range of activities, such as source handling, interrogation, and debriefing.

This infrastructure project created over 200 jobs during the construction period, in addition to economic development opportunities for local businesses and communities.

As highlighted in Strong, Secure, Engaged, technology is a critical enabler of modern military forces and fundamental to Canadian Armed Forces operations. The Integrated Soldier System Project (ISSP) is cutting-edge technology that significantly enhances soldiers’ situational awareness, allowing them to digitally visualize the location of other connected soldiers.

The project is being delivered in 3 phases: (1) delivery of wearable vests with integrated communications equipment and accessories, (2) connection and integration of equipment into Canadian Army vehicles, and (3) incorporation of new technology. The first supply of operational equipment for soldiers was delivered to 3rd Battalion, The Royal Canadian Regiment in Petawawa in July 2018.