Illegal drugs and problematic drug or substance use are not new in Canada. However, the opioid crisis has brought to light the devastating effects opioids are having on individuals, families and communities across Canada. Since 2016, there have been more than 9,000 apparent opioid-related deaths. In 2017, approximately 11 lives were lost each day because of opioid overdoses. Many others have been hospitalized because of an opioid overdose.

The numbers tell us that:

How are illegal opioids driving the crisis?

Canada’s street drugs have become tainted with powerful opioids, such as fentanyl. This is leading to a high rate of overdoses and deaths. Fake pills are being produced using unknown amounts of fentanyl. As well, sometimes drugs that are made illegally may accidently contain fentanyl when produced on surfaces and equipment contaminated with fentanyl. You can’t see, taste or smell fentanyl, and a few grains of salt worth of fentanyl can be enough to kill you.

Are Canada’s prescription opioids contributing to the crisis?

The opioid crisis is a complex issue. Illegal drugs with fentanyl added to them are causing many of the opioid-related harms and deaths. However, prescription opioids have also contributed to the crisis. While opioids offer benefits, they also come with risks. High rates of opioid prescribing mean that more people are being exposed to the risks of opioids.

The federal government has been working with partners to address the crisis by:

Get the facts at Canada.ca/Opioids 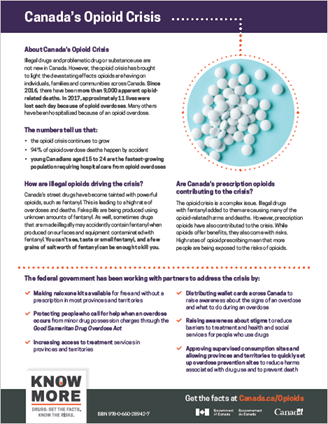