Cadets: An Investigation of the Support Provided to Cadets Who Suffer an Illness or Injury as a Result of a Cadet Activity

In December 2015, our Office launched a systemic review of the Canadian Cadet Program to identify any issues of unfairness that might arise should a cadet be seriously injured or killed during an approved Cadet activity. This review set out to determine what cadets (and/or their families) would be entitled to, and the process to access those entitlements.

Progress report on the status of recommendations

The Department of National Defence and the Canadian Armed Forces have taken tangible steps to ensure that cadets will be compensated and supported in the event of an illness or injury. (Refer to Recommendations 2 and 3.) As a result, health care entitlement information is now accessible, and insurances benefits are available for all cadets in the Army, Air Force, and Navy leagues.

Currently, the Cadets and Junior Canadian Rangers (CJCR) are evaluating League insurance and benefits, combined with coverage under the Government Employees Compensation Act (GECA). This review is expected to be completed by the end of this fiscal year (2022-2023). Following the review, the CJCR will be better positioned to determine what additional compensation and support may be required as well as what further legislative and/or policy changes must be made to fully implement this recommendation.

With regard to the general availability of information on cadet entitlements, we recommend that the Department of National Defence and the Canadian Armed Forces complete the following activities in time for summer training 2017:

Since 2017, the Department of National Defence and the Canadian Armed Forces have posted three cadet entitlement documents online. These documents are the Medical Care Brochure, the CANCDTGEN 007/18 Medical Care/Insurance for Cadets, and the Cadet Administration Training Orders 1001-1 Significant Incident Report. This third document covers injury to Cadets, including Staff Cadets.

The three cadet leagues (Navy League, Army Cadet League, Air Cadet League) amalgamated their insurance plans in 2018. Cadets can now access insurance plan information through their league website that is consistent for all three Leagues. As a result of these efforts, the Leagues have achieved a consistent procedural application for assisting those who may be ill or injured. Therefore, we have determined that this recommendation has been “implemented”, and that we will conduct no further follow up.

As part of the next annual review of the accident insurance policies of the Cadet Leagues, we recommend that the Department of National Defence and the Canadian Armed Forces ensure that the benefits are identical across the three Cadet Leagues.

We deem that this recommendation was implemented in 2019.

We recommend that the Department of National Defence and the Canadian Armed Forces conduct necessary consultations and institute policies and procedures regarding Staff Cadets’ possible entitlements to compensation in case of illness or injury arising from their duties.

Staff cadets are now covered under the insurance policy of the applicable League, (Navy League, Army Cadet League, Air Cadet League) The CANCDTGEN 007/18 Medical Care/Insurance for Cadets, implemented as a result of this report, redirects parents and cadets to the League websites for insurance information and procedures.

Therefore, we have concluded that this recommendation has been “implemented”. We will not conduct further follow up. 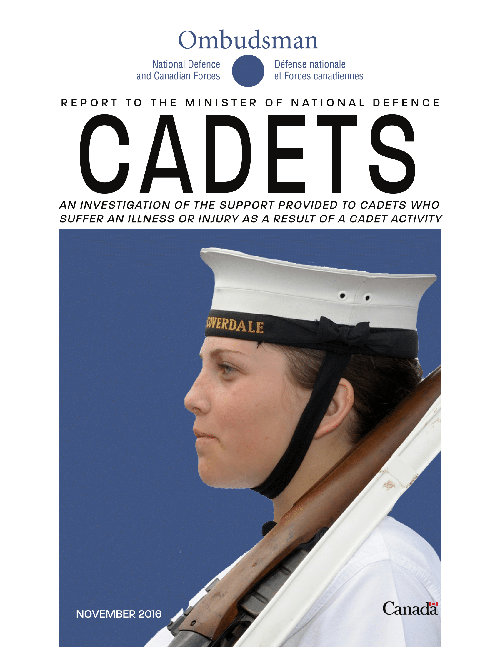