Lyme and other tick-borne diseases

Lyme disease is a vector-borne zoonotic disease caused by the bacterium Borrelia burgdorferi. The bacterium is a spirochete transmitted by infected nymphs and adult females of a small number of species of Ixodes ticks. The ticks mainly responsible for Lyme disease are the:

These species of ticks feed on a variety of mammal and avian hosts, including:

Some of these hosts serve as reservoirs in which the bacterium circulates.

Most Borrelia burgdorferi infections occur during the warmer months, but Lyme disease cases have been reported throughout the year. Ticks can be active whenever the temperature is consistently above freezing and the ground is not covered by snow.

With an increase in the number of Lyme disease cases in Canada, health professionals are encouraged to learn more about this disease. Most cases of Lyme disease can be managed successfully with a timely diagnosis and appropriate treatment.

The incubation period for early localized infection is 3 to 30 days.

It is important to note that some people with Lyme disease may have no or minimal symptoms. Others may experience more severe symptoms.

Individuals who do not develop symptoms until weeks after the tick bite may not remember being bitten nor associate symptoms with the bite. Furthermore, because nymphs are very small and tick bites are usually painless, most people may not know that they were bitten.

Clinical manifestations are not necessarily specific to the stage of infection. They can overlap and form a continuum in some untreated patients.

The diagnosis of early localized Lyme disease is primarily clinical with presence of an erythema migrans rash, supported by history of exposure to blacklegged ticks.

Following tick exposure, a patient with an erythema migrans rash should be treated for Lyme disease promptly, without the need for serological testing.

Most cases of Lyme disease can be treated successfully with appropriate treatment.

Patients who are treated with an appropriate antibiotic early in the course of illness (early disease), tend to recover more quickly than those who are treated at later stages of disease (late disease).

Doxycycline, cefuroxime axetil and amoxicillin are the most commonly recommended oral antibiotics. Doxycycline is not recommended for pregnant people.

The current laboratory test for Lyme disease is serology, where the presence of antibodies to Borrelia burgdorferi are detected using a two-tiered testing approach.

The results of laboratory testing should be considered in the context of the clinical presentation and duration of symptoms. It is important to understand the limitations of these tests.

Although the two-tiered serology test has a high degree of sensitivity in patients that present with late infection, false negative results can occur in early localized infections. This is because it takes time for a person to generate an antibody response that can be detected. This is a reflection of the bacteria's slow replication within the host.

Test may be negative in patients who are treated early with antibiotics. 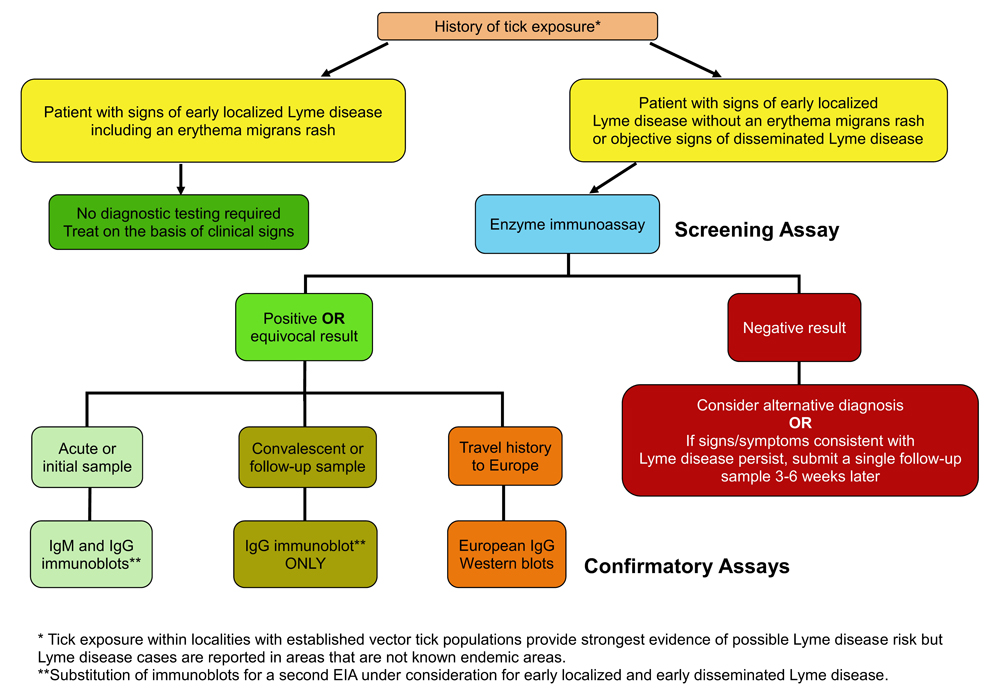 The national notification system is voluntary and receives cases reported through provincial and territorial public health authorities. Provinces and territories have their own legislation for the reporting of priority infectious diseases within their jurisdictions. If it meets the case definition, provinces and territories report newly diagnosed cases of Lyme disease to the Public Health Agency of Canada.