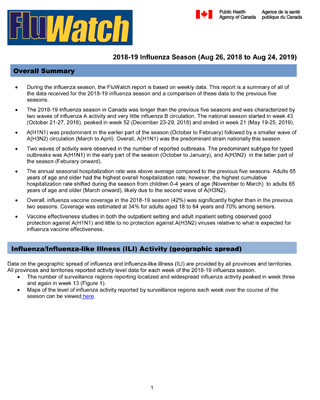 Data on laboratory-confirmed influenza detections are provided by 32 provincial, regional and some hospital laboratories. On average 99.6% of labs reported each week. During the 2018-19 season a total of 48,818 influenza detections were reported. Based on the seasonal thresholds for start and end of season (i.e. when the percentage of tests positive for influenza crossed 5%), the national influenza season started in week 43, peaked in week 52 and ended in week 21 (Figure 2).

Detailed information on age and influenza type/subtype was received for 39,192 of laboratory-confirmed influenza cases. Among influenza A detections where subtype was identified (13,718), subtype distribution varied by age-group (Figure 4). A(H1N1) was the predominant subtype in all age groups except those 65 years of age and older, among whom A(H3N2) was the predominant subtype (66%). Children less than five years of age had the highest proportion of A(H1N1) among subtyped influenza A detections (86%).

On average, during the 2018-19 season, 106 healthcare practitioners across the country participated in influenza-like illness (ILI) surveillance for the FluWatch program. Each week these sentinel healthcare practioners report the proportion of patients in their practice who had ILI.

FluWatchers are Canadians who report via a weekly online questionnaire if they have had symptoms of ILI in the preceding week. FluWatchers surveillance for the 2018-19 started in week 40 (October) and ended in week 18 (May). A total of 3,205 participants reported at least once this season, resulting in 64,728 completed questionnaires.

In addition, a total of 180 outbreaks of influenza-like illness were reported; 112 occurred in LTCF, 62 in schools, five in acute care facilities, and one in a setting categorized as “other” (e.g. retirement homes, correctional facilities, etc.)

A total of 613 ICU admissions and 224 deaths were reported this season.

A total of 946 hospitalizations were reported by CIRN-SOS sentinels this season (age ≥16) (Figure 10):

During the 2018-19 season, the National Microbiology Laboratory (NML) characterized 2,545 influenza viruses received from Canadian laboratories: 1,656 A(H1N1), 649 A(H3N2), 240 influenza B. Antigenic characterization is established by hemagglutination inhibition (HI) assay using cell-passaged vaccine reference viruses for A(H1N1) and influenza B, and the egg-passaged vaccine reference virus for A(H3N2). Over recent years, circulating strains of A(H3N2) have evolved, and are increasingly difficult to characterize by HI assay. Genetic characterization is established by sequencing the hemagglutinin gene of the influenza viruses to compare their genetic properties.

The influenza A(H3N2) component of the 2018-19 Northern Hemisphere influenza vaccine was an A/Singapore/INFIMH-16-0019/2016-like virus which belongs to the genetic group 3C.2a1.

The influenza A(H1N1) component of the 2018-19 Northern Hemisphere influenza vaccine was an A/Michigan/45/2015-like virus.

Approximately 97% (1612) of the A(H1N1) viruses characterized were antigenically similar to A/Michigan/45/2015, while only 3% (44) of viruses showed reduced titer with ferret antisera raised against cell culture-propagated A/Michigan/45/2015 (Figure 13-B).

The B/Colorado/06/2017-like virus was included in both the trivalent and quadrivalent vaccines.

The Seasonal Influenza Immunization Coverage Survey is an annual telephone survey conducted between January and February that collects information from Canadians on whether they received the annual seasonal influenza vaccine that season. Vaccine coverage is measured as the percentage of people who received the influenza vaccine in a specific influenza season. More detail on the methodology used for the coverage survey can be viewed here.

Overall, influenza vaccination coverage in the 2018-2019 season (42%) was significantly higher than the 2017-2018 season (38%) and the 2016-2017 season (36%). The vaccination rate was lowest among adults 18-64 years of age without any chronic medical condition (31%); however, coverage increased mostly among this subgroup when compared to the previous two seasons. Among high-risk groups, vaccination coverage rates for adults 18-64 years of age with a chronic medical condition (43%) and seniors 65 years of age and older (70%) remained steady over the past three seasons.

The Canadian Sentinel Practitioner Surveillance Network (SPSN) provides estimates of the effectiveness of the seasonal influenza vaccine in preventing primary care visits for laboratory confirmed influenza among Canadians of all ages but primarily those from 20-64 years of age.

More information on the SPSN including study methodology and available publications can be viewed here.

The Serious Outcomes Surveillance (SOS) Network of the Canadian Immunization Research Network (CIRN-SOS) provides estimates of the effectiveness of the seasonal influenza vaccine in preventing hospitalization for laboratory-confirmed influenza in adults.

More information on the CIRN-SOS Network including study methodology and available publications can be viewed here.