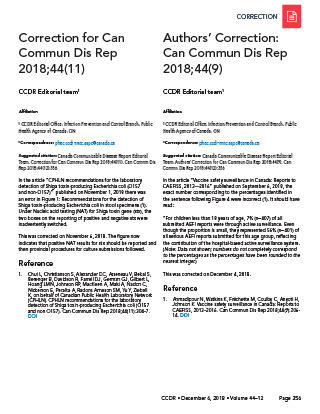 In the article “CPHLN recommendations for the laboratory detection of Shiga toxin-producing Escherichia coli (O157 and non‑O157)” published on November 1, 2018 there was an error in Figure 1: Recommendations for the detection of Shiga toxin-producing Escherichia coli in stool specimens Footnote 1. Under Nucleic acid testing (NAT) for Shiga toxin gene (stx), the two boxes on the reporting of positive and negative stx were inadvertently switched.

This was corrected on November 6, 2018. The figure now indicates that positive NAT results for stx should be reported and then provincial procedures for culture submissions followed.

In the article “Vaccine safety surveillance in Canada: Reports to CAEFISS, 2013—2016” published on September 6, 2018, the exact number corresponding to the percentages identified in the sentence following Figure 4 were incorrect Footnote 1. It should have read:

“For children less than 18 years of age, 7% (n=407) of all submitted AEFI reports were through active surveillance. Even though the proportion is small, they represented 56% (n=401) of all serious AEFI reports submitted for this age group, reflecting the contribution of the hospital-based active surveillance system. (Note: Data not shown; numbers do not completely correspond to the percentages as the percentages have been rounded to the nearest integer.)