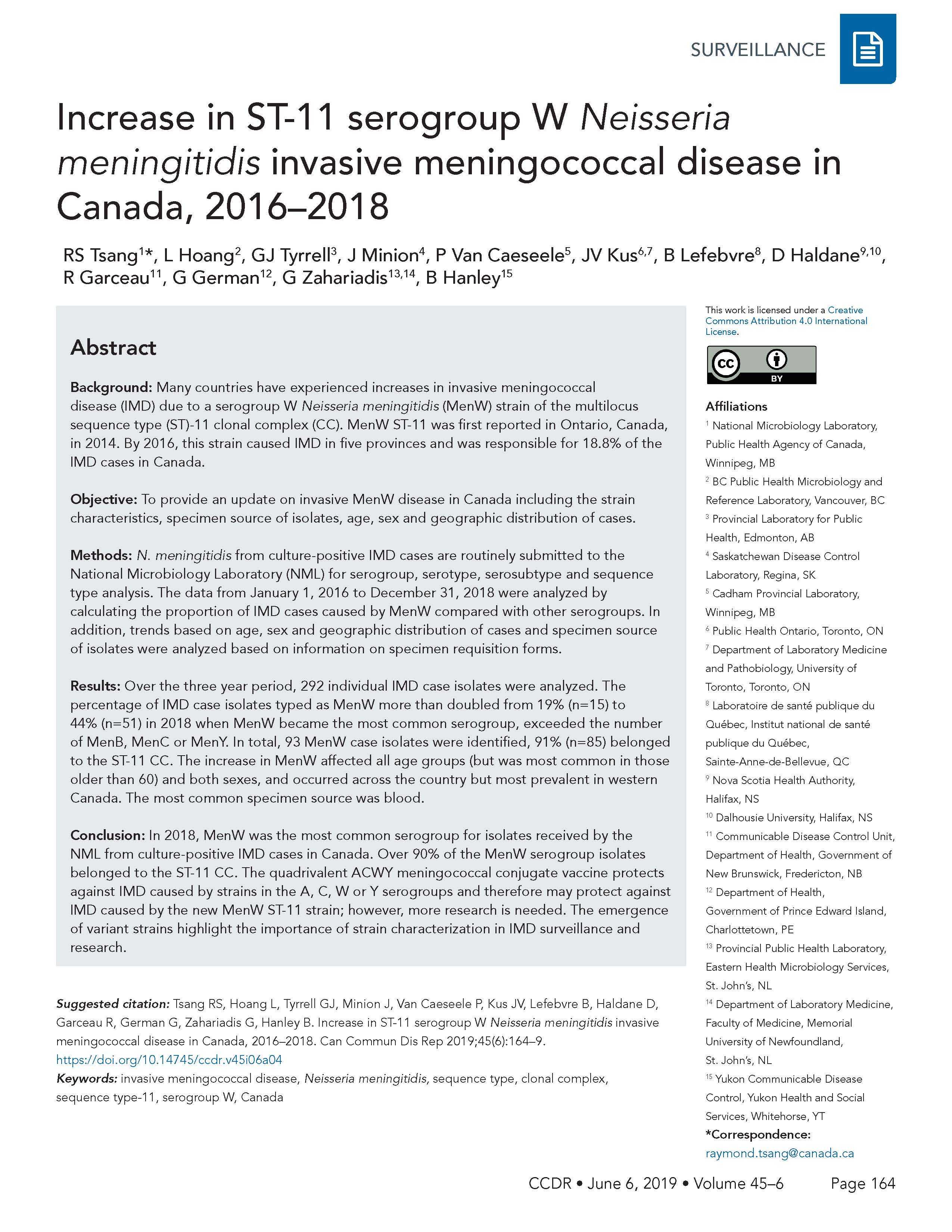 Download this article as a PDF
Published by: The Public Health Agency of Canada
Issue: Volume 45-6: Influenza: An update
Date published: June 6, 2019
ISSN: 1481-8531
Subscribe to CCDR

Background: Many countries have experienced increases in invasive meningococcal disease (IMD) due to a serogroup W Neisseria meningitidis (MenW) strain of the multilocus sequence type (ST)-11 clonal complex (CC). MenW ST-11 was first reported in Ontario, Canada, in 2014. By 2016, this strain caused IMD in five provinces and was responsible for 18.8% of the IMD cases in Canada.

Objective: To provide an update on invasive MenW disease in Canada including the strain characteristics, specimen source of isolates, age, sex and geographic distribution of cases.

Methods: N. meningitidis from culture-positive IMD cases are routinely submitted to the National Microbiology Laboratory (NML) for serogroup, serotype, serosubtype and sequence type analysis. The data from January 1, 2016 to December 31, 2018 were analyzed by calculating the proportion of IMD cases caused by MenW compared with other serogroups. In addition, trends based on age, sex and geographic distribution of cases and specimen source of isolates were analyzed based on information on specimen requisition forms.

Results: Over the three year period, 292 individual IMD case isolates were analyzed. The percentage of IMD case isolates typed as MenW more than doubled from 19% (n=15) to 44% (n=51) in 2018 when MenW became the most common serogroup, exceeded the number of MenB, MenC or MenY. In total, 93 MenW case isolates were identified, 91% (n=85) belonged to the ST-11 CC. The increase in MenW affected all age groups (but was most common in those older than 60) and both sexes, and occurred across the country but most prevalent in western Canada. The most common specimen source was blood.

Conclusion: In 2018, MenW was the most common serogroup for isolates received by the NML from culture-positive IMD cases in Canada. Over 90% of the MenW serogroup isolates belonged to the ST-11 CC. The quadrivalent ACWY meningococcal conjugate vaccine protects against IMD caused by strains in the A, C, W or Y serogroups and therefore may protect against IMD caused by the new MenW ST-11 strain; however, more research is needed. The emergence of variant strains highlight the importance of strain characterization in IMD surveillance and research.

Invasive meningococcal disease (IMD) caused by the bacterium Neisseria meningitidis is a notifiable disease in most countries including Canada as well as by World Health OrganizationFootnote 1. The most severe forms of IMD include meningitis and septicemia, but the bacterium is also capable of causing pneumonia, septic arthritis and localized infections like conjunctivitis and urethritis. Before routine vaccination against meningococcal serogroup C (MenC) was introduced in Canada, incidence rates of IMD were about 1.0 case per 100,000 population with rates increasing during outbreaks of MenC diseaseFootnote 2. From 1989 to 1993, for example, incidences of IMD were 1.4–1.6 cases per 100,000Footnote 3. Since the introduction of MenC conjugate vaccines in the mid-2000s, the overall average incidence rate of IMD in Canada decreased to about 0.6 per 100,000 population, with most cases due to MenB and MenY. Historically, MenW has not been a major cause of IMDFootnote 4.

Based on the antigenicity of their surface capsular polysaccharides, 12 N. meningitidis serogroups have been identified. Most invasive diseases are caused by the six serogroups of A (MenA), B (MenB), C (MenC), W (MenW), X (MenX) and Y (MenY)Footnote 5Footnote 6. The prevalence of different serogroups varies geographicallyFootnote 5 and may be further affected by the local vaccination programsFootnote 7.

Besides the capsular serogroup polysaccharide that contributes to virulence, most strains with the potential to cause IMD outbreaks or epidemics belong to a limited number of hypervirulent clones or lineages and are classified into sequence types (STs). Related sequence types are grouped into clonal complexes (CCs). Some of the well-established hypervirulent clones have been described as ST-11, ST-32 and other sequence typesFootnote 5Footnote 8. Two outer membrane protein antigens, PorB and PorA, are used to further classify strains into serotypes and serosubtypes, respectivelyFootnote 9. When these outer membrane proteins are used together with the capsular antigen, strains can be classified by their antigenic formula such as, for example, serogroup B:serotype 4:serosubtype P1.7,4. This helps to track the multiple variants and epidemiology of this disease.

Data collected at the NML over the last five years have shown the emergence of a MenW ST-11 clone in Canada, characterized by the antigens W:2a:P1.5,2. This clone was first detected in Ontario in 2014Footnote 10. By 2016, four other provinces had reported IMD cases due to this MenW cloneFootnote 11.

In this study, we report on the characterization of IMD isolates sent to the NML between 2016 and 2018. We analyzed the strains by antigenic and genetic typing and analyzed trends based on age, sex, geographic distribution of cases and specimen source.

Invasive N. meningitidis cultured and identified at local hospitals and diagnostic laboratories are routinely submitted to their respective provincial public health laboratories for serogroup determination or confirmation. Provinces and territories submit such isolates to the NML for additional typing as part of the national surveillance of IMD.

This study made use of isolates of N. meningitidis obtained from individual IMD cases, and did not include cases diagnosed by PCR or antigen detection. Most of the isolates the NML receives are from culture-positive IMD cases. Previous studies have shown that 90% of IMD cases identified by provinces and territories could be matched to isolates received at the NMLFootnote 12Footnote 13, suggesting that the NML has a robust and representative sample.

This study included all invasive N. meningitidis isolates obtained from culture-confirmed IMD cases submitted to the NML between January 1, 2016 and December 31, 2018. Duplicate isolates from the same patients were removed from the analysis.

At the NML, isolates were characterized by standard methods to determine their antigenic formula (serogroup:serotype:serosubtype). Multilocus sequence typing (MLST) was performed according to procedures described previouslyFootnote 14Footnote 15, and isolates were classified into sequence types and clonal complexes as per the procedures described by the Neisseria MLST websiteFootnote 16.

Information on the age and sex of each patient and geographic origin and source of each specimen was obtained from the requisition forms provided with specimens by the provincial public health laboratories. For geographic origin, we combined the data for Atlantic Canada (New Brunswick, Newfoundland and Labrador, Nova Scotia, Prince Edward Island) as well as for northern Canada (Northwest Territories, Nunavut, Yukon Territory).

The increase in MenW was particularly significant in western Canada (Table 2). The proportion of MenW among all IMD isolates from 2016 to 2018 was 57% in British Columbia, 50% in Alberta, 43% in Saskatchewan and 46% in Manitoba. In contrast, overall percentages of IMD isolates typed as MenW were 25% in Ontario and 17% in Quebec. In Atlantic Canada, there was only one MenW case isolate in the same three-year period. Only one MenW out of a total of two IMD isolates was received at the NML from northern Canada.

The source of specimens for MenW of the ST-11 CC were mainly from blood cultures (n=79 or 93%); three were found in cerebrospinal fluid (including one in both blood and cerebrospinal fluid). In 2018, there were two cases with the MenW ST-11 CC in the joint fluid; in one case, the organism was isolated from a subarachnoid specimen.

In the last three years, the number of invasive N. meningitidis isolates received at the NML has increased by 44%, from 80 isolates in 2016 to 115 isolates in 2018. The increase was mainly due to MenW, with number of case isolates more than tripling, from 15 in 2016 to 51 in 2018. This increase in MenW shifted the serogroup distribution of IMD in Canada, which since the introduction of MenC conjugate vaccines, has been predominantly MenB. The increase in MenW in Canada is due to the continuing expansion and spread of the hypervirulent ST-11 CC. This increase was particularly evident in the western provinces where MenW accounted for 43–57% of their IMD isolates.

The MenW ST-11 CC isolates in Canada are similar to the strains currently circulating globallyFootnote 17. Parallel findings have been reported in AustraliaFootnote 18, parts of the United States (US)Footnote 19Footnote 20 and the Central African RepublicFootnote 21. In Australia, 44% of IMD cases in 2016 were due to MenW, an almost three-fold increase from 2015Footnote 18. In the Central African Republic, 65% of culture-positive IMD cases were due to MenW, with the median age of MenW patients 60 years in 2015 and 66 years in 2016Footnote 21.

Our finding of one invasive ST-60 CC (W:2a:P1.5,2 isolate of ST-11739) in MenW was unusual because most meningococci of the ST-60 CC in Canada belong to MenBFootnote 23Footnote 24 and previous studies of MenC or MenW that expressed serotype 2a antigen had been typed mostly as ST-11 CCFootnote 11Footnote 25. Further studies are required to understand the origin of this unusual W:2a:P1.5,2 ST-11739 strain.

There are some limitations to our study that should be considered when interpreting the findings. First, we only examined culture-confirmed cases, and did not include cases diagnosed by molecular means alone (i.e. PCR). Although this might affect the proportion of IMD cases caused by MenW, since PCR-diagnosed cases only constitute approximately 10% of all IMD cases identified in CanadaFootnote 4, the overall effect on the results would probably not alter the current trend of increase in MenW IMD cases.

Second, we did not collect clinical data or disease outcomes of the MenW cases, and therefore we do not know if fatality rates were as high as those reported in other countries or regions (24% in Georgia, US; 20% in England, United Kingdom; and 21% in Australia)Footnote 19Footnote 26Footnote 27. Similarly, we do not know if the Canadian cases had unusual clinical presentations such as gastrointestinal symptoms or epiglottitisFootnote 26Footnote 28.

Between 2016 and 2018, there has been an increase in invasive MenW disease that has altered the serogroup distribution of culture-confirmed IMD cases in Canada. The quadrivalent ACWY meningococcal conjugate vaccine protects against IMD caused by strains in the A, C, W or Y serogroups. The vaccine may also protect against IMD caused by the new MenW ST-11 strain, but additional research is needed. The emergence of newer clonal types and unusual strains highlight the importance of strain characterization in IMD surveillance and research.

All authors (RST, LH, GJT, JM, PVC, JVK, BL, DH, RG, GG, GZ and BH) are involved in the surveillance of IMD in Canada. RST prepared the first draft and all authors contributed to the final version with comments and suggestions.

We thank the staff at the provincial public health laboratories for identifying and sending N. meningitidis isolates to the National Microbiology Laboratory (NML). We also thank D Law, J Zhou and S Deng for providing laboratory assistance in the analysis of strains, and the NML’s DNA Core Service for providing assistance in nucleotide sequencing.

This publication made use of the Neisseria multilocus sequence typing websiteFootnote 16 developed by K Jolley and sited at the University of Oxford. The development of this site was funded by the Wellcome Trust and the European Union.

Laboratory surveillance of invasive meningococcal disease is supported by the Public Health Agency of Canada.