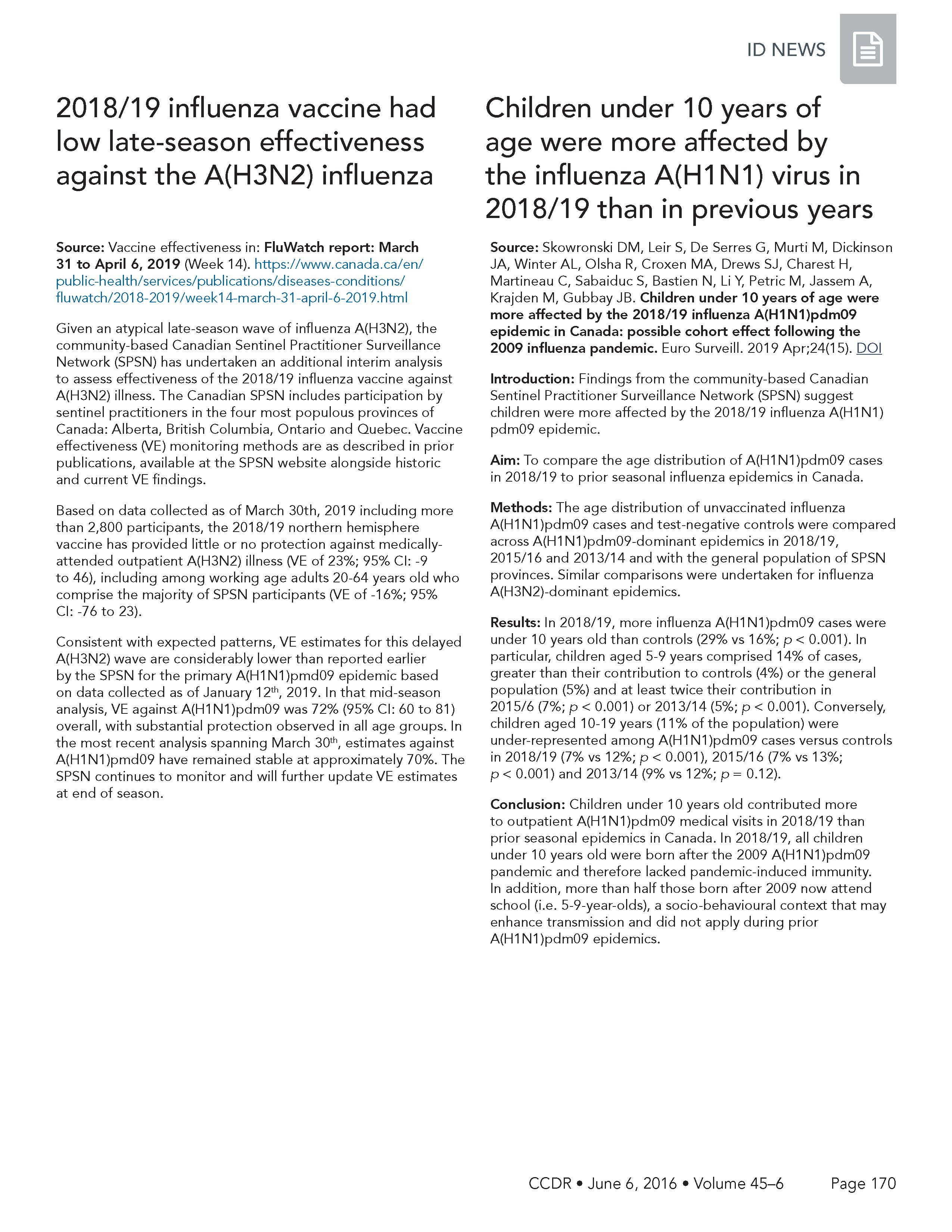 Download this article as a PDF
Published by: The Public Health Agency of Canada
Issue: Volume 45-6: Influenza: An update
Date published: June 6, 2019
ISSN: 1481-8531
Subscribe to CCDR

Given an atypical late-season wave of influenza A(H3N2), the community-based Canadian Sentinel Practitioner Surveillance Network (SPSN) has undertaken an additional interim analysis to assess effectiveness of the 2018/19 influenza vaccine against A(H3N2) illness. The Canadian SPSN includes participation by sentinel practitioners in the four most populous provinces of Canada: Alberta, British Columbia, Ontario and Quebec. Vaccine effectiveness (VE) monitoring methods are as described in prior publications, available at the SPSN website alongside historic and current VE findings.

Consistent with expected patterns, VE estimates for this delayed A(H3N2) wave are considerably lower than reported earlier by the SPSN for the primary A(H1N1)pmd09 epidemic based on data collected as of January 12th, 2019. In that mid-season analysis, VE against A(H1N1)pdm09 was 72% (95% CI: 60 to 81) overall, with substantial protection observed in all age groups. In the most recent analysis spanning March 30th, estimates against A(H1N1)pmd09 have remained stable at approximately 70%. The SPSN continues to monitor and will further update VE estimates at end of season.

Aim: To compare the age distribution of A(H1N1)pdm09 cases in 2018/19 to prior seasonal influenza epidemics in Canada.

Conclusion: Children under 10 years old contributed more to outpatient A(H1N1)pdm09 medical visits in 2018/19 than prior seasonal epidemics in Canada. In 2018/19, all children under 10 years old were born after the 2009 A(H1N1)pdm09 pandemic and therefore lacked pandemic-induced immunity. In addition, more than half those born after 2009 now attend school (i.e. 5-9-year-olds), a socio-behavioural context that may enhance transmission and did not apply during prior A(H1N1)pdm09 epidemics.