Antimicrobial resistance (AMR) is an issue of increasing public concern.  In addition to reducing our ability to effectively treat bacterial infections in humans and animals, AMR presents a serious economic challenge.  Although the precise financial burden associated with AMR is not known, it is estimated that resistance at least doubles the cost of treating a bacterial infection and adds between $40 and $52 million per year to indirect and direct health care costs in Canada (CCAR, 2002). 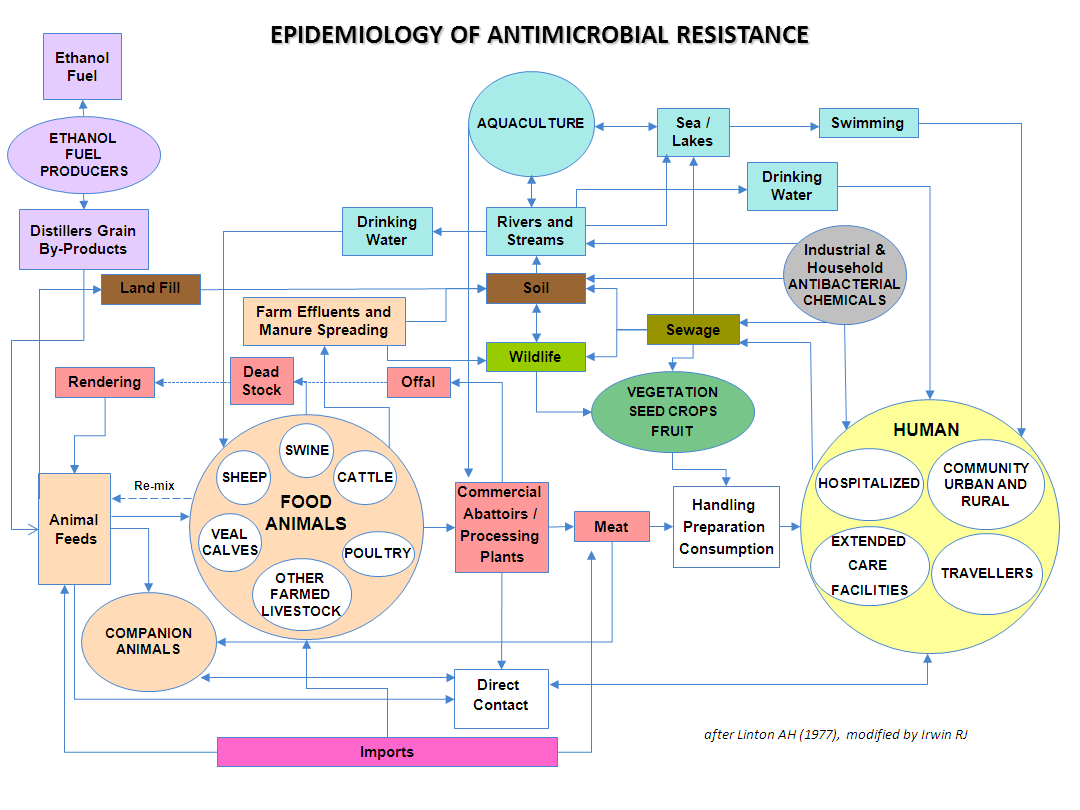 This figure describes how antimicrobials used in many sectors (circles) contribute to the emergence and spread of resistant micro-organisms in various settings (squares).  Each of these are linked through direct and indirect pathways (eg. Direct pet to human contact or indirect from water or food consumption).

A Call for Action

International public health authorities are urging countries to implement integrated AMR surveillance systems.  These systems are needed to implement sound public health interventions and to enhance prudent use practices in human and veterinary medicine.  Surveillance is also necessary to support the development of international food safety standards. Multiple committees representing the joint Food and Agriculture Organization (FAO) of the United Nations/World Health Organization (WHO) and the Codex Alimentarius Commission are currently examining the issue of AMR.  Food animal producers are under increasing pressure to restrict antimicrobial use to meet domestic and international market demands.

In Canada, the establishment of a national surveillance system to monitor AMR and use in the agri-food and agriculture sectors and the impact of resistance on human health was formally recommended in 1997 at the national consensus conference “Controlling Antimicrobial Resistance: An Integrated Action Plan for Canadians” co-convened by Health Canada and the Canadian Infectious Diseases Society.  Subsequently, this recommendation received further endorsement from several national external advisory committees to Health Canada; the Enteric Disease Surveillance (ENDS) Steering Committee, the Canadian Committee on Antibiotic Resistance (CCAR), and most recently the Advisory Committee on Animal Uses of Antimicrobials and Impact on Resistance and Human Health.  This latter committee stated in their 2002 report that “In Canada, as in most countries, the [surveillance] data are fragmentary, often biased, focused on a narrow and variable range of bacterial pathogens, collected in an unsystematic way and not generally compatible between laboratories and/or countries because methods used for testing resistance have not been standardized” (HC, 2002).