The Canadian Integrated Program for Antimicrobial Resistance Surveillance (CIPARS) tracks selected bacteria that reside in the intestinal tract of people and animals in order to understand trends in antimicrobial resistance use and resistance. Antimicrobials are drugs used to kill bacteria that can cause infectious diseases. These bacteria can develop or acquire resistance to these drugs, making them less or not effective.

Chapter 1 of the 2012 CIPARS Annual Report includes information on the design and methods used to obtain data on antimicrobial resistance (AMR) and use (AMU) in people, cattle, chickens, pigs, turkeys, horses and animal feed. Analysis methods applied on AMR and AMU data are also reported.

In 2012, new methodologies have been adopted for AMR surveillance. This chapter also includes new tables to summarize the design and methods applied since the implementation of the different AMR and AMU components of CIPARS.

Of particular importance to public health, the percent of resistant human Salmonella infections decreased 3% between 2011 and 2012. Additionally, resistance to critically important antimicrobials (considered of very high importance to human medicine - Category I) in people infected with Salmonella Typhi while travelling continued to increase in 2012.

Among bacteria from animals and food, resistance to Category I antimicrobials continued to increase and was more common in bacteria from chickens and pigs compared to cattle. In Québec, ceftiofur resistance (Category I) in Salmonella or E. coli from retail chicken showed a continued rise since the reintroduction of the use of that antimicrobial in 2007. Other significant trends were found for other important antimicrobials in various food animals in Canada and have been highlighted in this chapter.

Chapter 3. Antimicrobial Use In Animals

This chapter highlights trends in animal antimicrobial use (AMU) in Canada. The AMU findings are based on information from grower-finisher pig herds collected on farm through questionnaires. Additionally, this chapter presents AMU estimations provided on the quantities of antimicrobials distributed for sale for use in animals by the Canadian Animal Health Institute (CAHI) member companies. 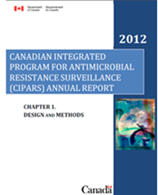 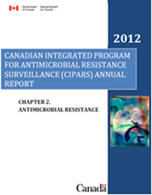 This chapter brings together some of the results across surveillance components, over time, across regions, and across host or bacterial species. Salmonella Enteritidis was the most common Salmonella identified from humans and also isolated from retail chicken meat in 2012. This may indicate that fresh chicken meat may be an important source of S. Enteritidis infections in people. Resistance was not detected in S. Enteritidis from farm, abattoir, or retail meat samples for any animal species tested. Resistant S. Enteritidis from ill people does not appear to be coming from the major Canadian agri-food commodities sampled in this program (cattle, chickens, and pigs).

Some human and agri-food isolates were found with resistance to 5 or more antimicrobial classes. Not all resistance trends for human salmonellosis appear to be linked to the major agri-food commodities (cattle, pig, and chicken).

Campylobacter jejuni was frequently detected in retail chicken meat. This suggests that domestic human cases may be related to handling or consumption of domestically-produced chicken products. Potential links between people and chicken meat may be further clarified with the addition of AMR data for human Campylobacter infections in the future. The pattern of ciprofloxacin (an antimicrobial of very high importance to human medicine) resistant Campylobacter in retail chicken continues to change over time and across regions.

Although the same antimicrobials are used in humans and animals, some are used at much greater volumes in human medicine than animal medicine, and vice versa.