On August 28, 2019, the Impact Assessment Act, the Canadian Energy Regulator Act, and the Navigation Protection Act came into force. The Navigation Protection Act amends and renames the Canadian Navigable Waters Act. This archived Web page remains online for reference, research or recordkeeping purposes. This page will not be altered or updated. For more information, please visit the Transport Canada website.

This page has been archived on the Web.

All Canadians enjoy the right to navigate their boats (whether they are motorized, canoes or kayaks) through the vast network of oceans, rivers, lakes and canals across the country.

The Government is amending the navigation protection legislation that was put in place to oversee projects such as bridges and dams that could affect navigation. A review conducted over the past year has shown that there are improvements needed in the protection of navigation in Canada.

Why we did this

The Canadian Navigable Waters Act delivers on the Government of Canada’s promise to better protect the right to navigate on all Canada’s navigable waters.

Protecting the public right of navigation is an important element of the new environmental and regulatory system in which important projects are allowed to proceed in a sustainable manner, with a framework that provides for predictable and timely decisions.

What needs to change

During its review of the current Navigation Protection Act—Indigenous peoples, boaters, industry, the Standing Committee on Transport, Infrastructure and Communities and other levels of government—shared their views on what needs to change in the current Act. Canadians have said that:

If passed, the Canadian Navigable Waters Act, the Government of Canada will:

Benefits to project developers or businesses

The Canadian Navigable Waters Act will allow projects that meet established criteria to go ahead while protecting the public right of navigation by having: 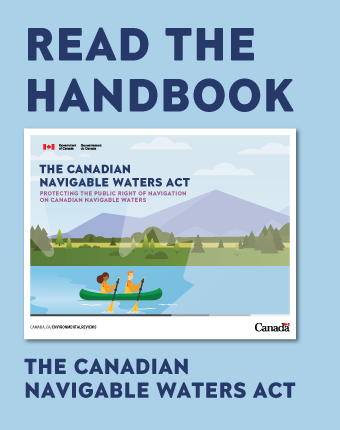 The Government of Canada’s desire for a strong relationship with Indigenous peoples is at the heart of its proposed approach.

The Canadian Navigable Waters Act will advance reconciliation and create new opportunities for Indigenous peoples to partner with Canada. For example, it will:

Benefits to the broader public

Mariners, boaters and other recreational users will be able to continue to navigate all of Canada’s navigable waters.

In 2012, Parliament approved changes to Navigable Waters Protection Act and changed its name to the Navigation Protection Act. The changes came into force in 2014. The Government of Canada promised to review these changes, as well as restore protections and introduce modern safeguards.

On June 20, 2017, the Government of Canada tabled its response to the Standing Committee by accepting and, in some cases, going beyond its recommendations.

What will be different?