The Toronto Scottish Regiment (Queen Elizabeth The Queen Mother’s Own) 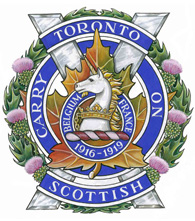 The mission task for our unit is: Direct Fire Support – A platoon of 39 members, which is trained in the employment of various infantry heavy weapon systems to provide tactical direct fire support to a manoeuvring battle group.

The Toronto Scottish Regiment is a Primary Reserve infantry regiment with companies in Etobicoke and Mississauga.

As the Army’s primary war-fighters and the core of the combat arms team, infantry soldiers are responsible for closing with and destroying the enemy. Supported by the artillery, regiments of armour and the combat engineers, infantry soldiers are capable of operating anywhere in the world in any environment - arctic tundra, mountains, jungle or desert - and in any combination of arms, including airmobile and amphibious operations.

The Toronto Scottish Regiment was raised on July 1, 1915, as the 75th (Mississauga) Battalion, Canadian Expeditionary Force (CEF), by Lieutenant-Colonel Samuel Beckett. Within three weeks more than 1,500 personnel had been recruited. By March 1916 the battalion was fully trained and sailed for Liverpool. Over 5,500 soldiers served in the battalion during the First World War, of whom 1,049 were killed, including Lieutenant-Colonel Beckett. The 75th Battalion CEF was awarded 16 Battle Honours, and Captain Bellenden Hutcheson, the Medical Officer, won the Victoria Cross.

Lieutenant-Colonel Colin Harbottle, who had taken command of the battalion soon after the death of Lieutenant-Colonel Beckett, was encouraged by many of former officers and men to have the 75th become a permanent unit in the Canadian Militia. In May 1920 the government authorized the forming of the Mississauga Regiment to perpetuate the traditions of the 75th Battalion CEF. The Mississauga Regiment was re-designated The Toronto Scottish Regiment on Sept. 1, 1921.