Duties and Functions of the Director of Military Prosecutions

The Director of Military Prosecutions (DMP) is the senior military prosecutor in the Canadian Armed Forces (CAF). He is appointed by the Minister of National Defence for a fixed term pursuant to subsection 165.1(1) of the National Defence Act (NDA). Under the NDA the DMP is responsible to prefer all charges to be tried by court martial and for the conduct of all prosecutions at courts martial. The DMP also acts as counsel, when instructed, in respect of appeals to the Court Martial Appeal Court (CMAC) and the Supreme Court of Canada (SCC). The DMP is also responsible to provide advice in support of investigations conducted by the Canadian Forces National Investigation Service (CFNIS), a military police service that reports to the Canadian Forces Provost Marshal. The DMP also represents the CAF at custody review hearings and provides legal advice and training to the CFNIS.

Appointed for a four-year term, the DMP acts independently from CAF and Department of National Defence (DND) authorities when exercising his prosecutorial powers, duties and functions and fulfils his mandate in a manner that is fair and impartial. Although the DMP acts under the general supervision of the JAG, he exercises his prosecutorial mandate independent from the JAG and the chain of command. The DMP has a constitutional obligation, like any other public official exercising a prosecutorial function, to act independently of partisan concerns and other improper motives.

In accordance with sections 165.12 and 165.13 of the NDA, when a charge is referred to him, the DMP determines whether to:

Ordo Per Justitia or Discipline Through Justice. The DMP is a key player in the Canadian military justice system helping to promote respect for the law, as well as discipline, good order, high morale, esprit de corps, group cohesion and operational efficiency and capability. 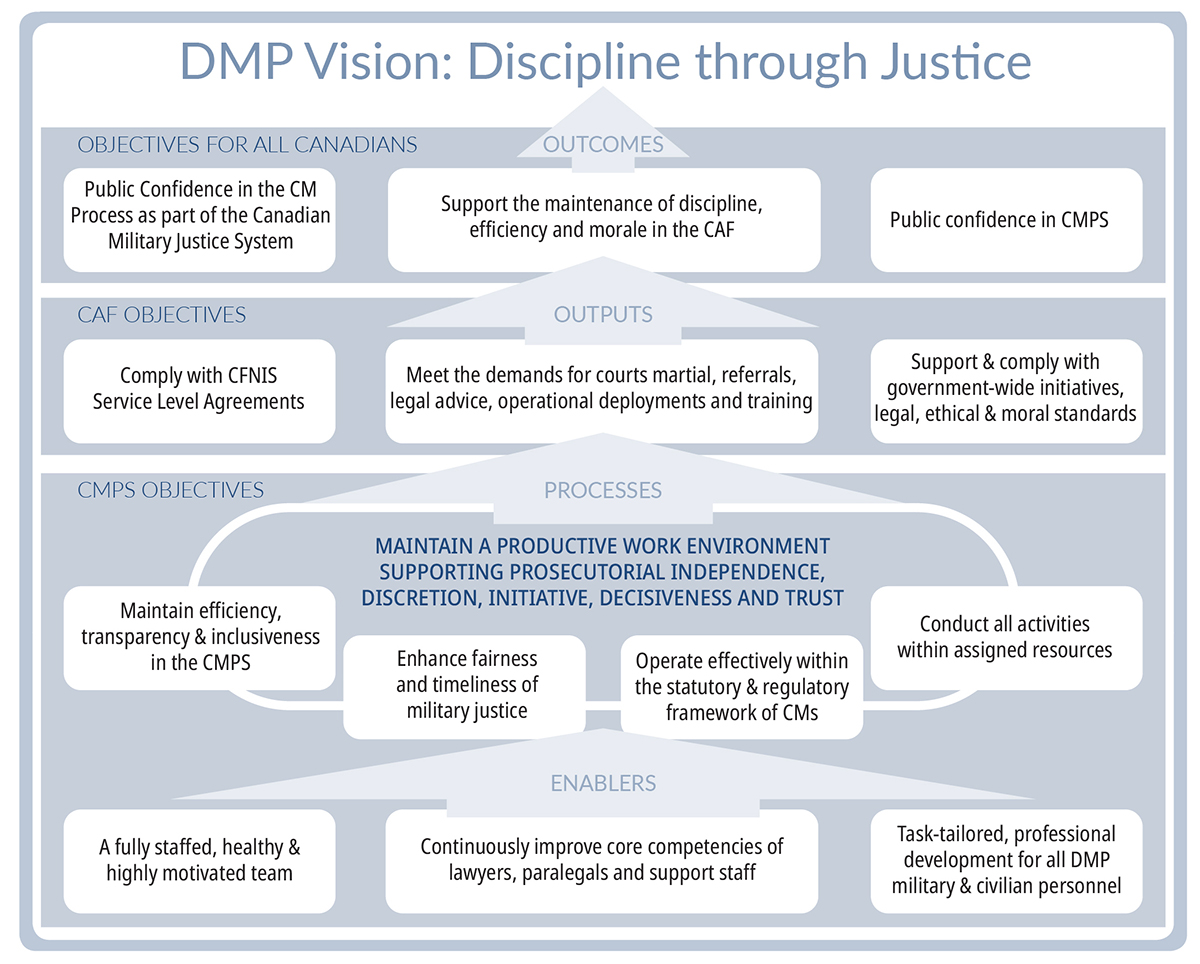 In accordance with section 165.15 of the NDA, the DMP may be assisted and represented, to the extent determined by the DMP, by officers who are barristers or advocates with standing at the bar of a province. In this regard the DMP is assisted by a number of Regular and Reserve Force legal officers appointed to act as military prosecutors, along with a civilian paralegal and support staff. This organization, known as the Canadian Military Prosecution Service (CMPS), is headquartered in Ottawa and with several Regional Military Prosecutors (RMPs) located across Canada.

The ADMP is responsible to assist the DMP in the day-to-day management of the CMPS. In addition, the ADMP supervises the appellate counsel, the prosecutor responsible for policy, training and communications and the legal advisor to the CFNIS.

The Appellate counsel is responsible to appear as counsel on behalf of the Minister of National Defence for all cases argued at the CMAC and the SCC.Footnote 2

The prosecutor responsible for policy, training and communications provides advice to the DMP on all policy related matters and to update the DMP Policy Directives, as necessary. The policy counsel is also responsible to assist in the coordination of all training opportunities for members of the CMPS.

The RMP offices are located in Halifax, Valcartier, Ottawa, Edmonton and Esquimalt. With the exception of Esquimalt, which only has one RMP and one civilian administrative support staff, each RMP Office has two RMP positions and one civilian administrative support staff. All RMPs also represent the CAF at custody review hearings on behalf of the DMP and provide legal advice and training to the CFNIS.

The CMPS also relies on five experienced civilian prosecutors who are members of the Reserve Force and prosecute cases with the CMPS. These five members consist of DDMP Reserve, a Lieutenant Colonel who is responsible for the overall supervision and management of Reserve Force prosecutors, as well as four prosecutors who assist their Regular Force counterparts in the prosecution of cases at courts martial.

The position of the DDMP for the Sexual Misconduct Response Team (SMART) was created in the last reporting period and is primarily responsible for mentoring prosecutors in the performance of their duties related to serious sexual misconduct prosecutions. 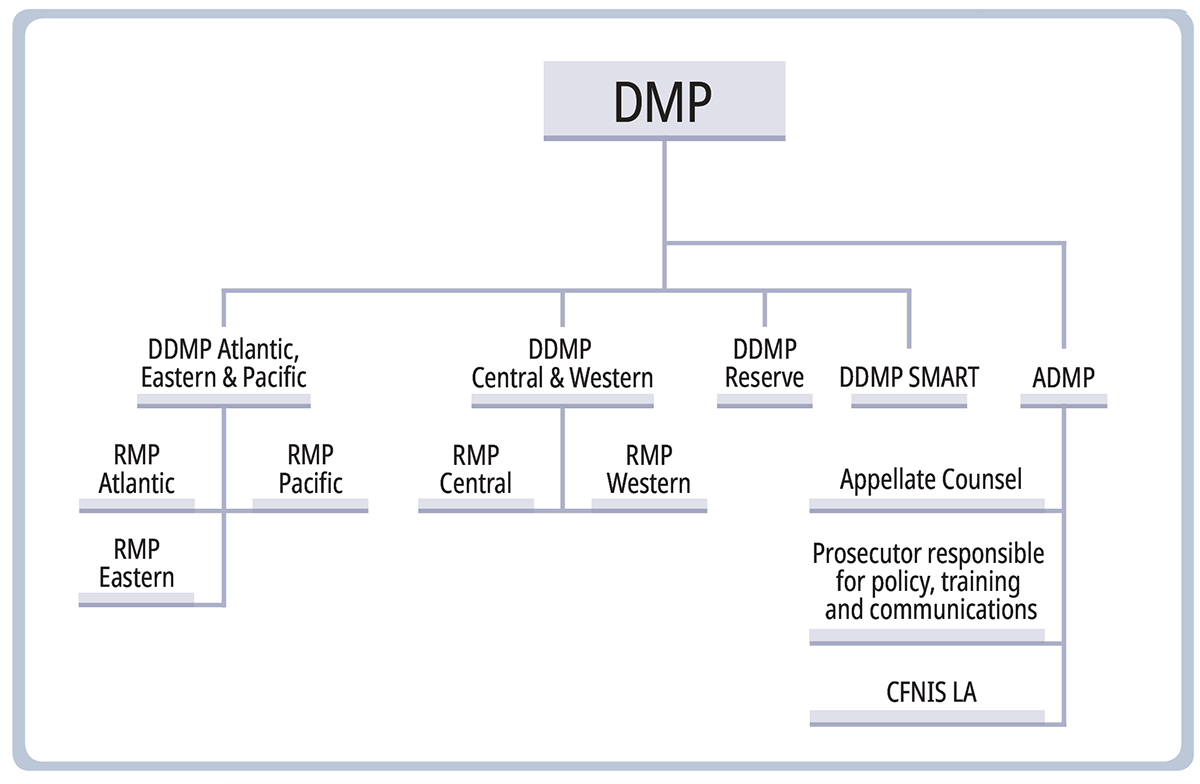 On October 20, 2018, the DMP was reappointed by the Minister to a second four year term as the DMP. Also during the reporting period there were a number of postings and changing of positions within the CMPS. The ADMP was posted out of CMPS after nearly ten years of military prosecution experience and was replaced by the DDMP for the Atlantic, Eastern and Pacific Regions. Filling the spot of the DDMP was the Appellate Counsel who was promoted to the rank of Lieutenant Colonel during the reporting period. Additionally, the senior RMP from the Halifax office was relocated to Ottawa and assumed the duties of Appellate Counsel.

There were also a number of internal postings within CMPS as prosecutors already with the CMPS were posted into RMP positions in the Halifax, Ottawa and Esquimalt regional offices. Also, the senior RMP from the Ottawa office was posted as the CFNIS legal advisor. There were four new prosecutors posted to the CMPS occupying positions in the Atlantic, Eastern and Western regions as well as the Prosecutor responsible for policy, training and communications located at CMPS Headquarters. Finally, two RMPs, one in the Pacific Region and one in the Atlantic Region, were on maternity leave during this reporting period.

During this reporting period an offer of employment was made to an experienced civilian Crown counsel in Nova Scotia. That individual continues to progress through the enrollment process and is expected to join the CMPS as a Reserve Force prosecutor early in the next reporting period.

During the reporting period, the CMPS paralegal left the organization to pursue other opportunities within the federal public service. This position was filled on a short term basis with another civilian member from the Office of the JAG filling it for a four month period in an acting capacity. It is expected that the position will be filled on a permanent basis in the next reporting period.

In addition, the position of legal assistant in the Central Region was vacant at the beginning of the reporting period. It was filled, on an interim basis, between June and October 2018 and was permanently filled in December 2018.

The need to continue to develop legal skills and keep abreast of key developments in the law is important for any lawyer but is critical for all prosecutors, including military prosecutors. The state of criminal law remains in constant evolution as a result of court rulings as well as through changes to the Criminal Code of Canada as well as the NDA.

The CMPS held its annual Continuing Legal Education workshop on 11 and 12 February 2019 for its Regular Force and Reserve Force military prosecutors. The training touched upon several topics, including media training and an interactive demonstration dealing with a mock sexual assault scenario.

As prosecutors may be exposed to frequent interactions with journalists, prosecutors received a half-day of training from public affairs where practice interviews were held enabling prosecutors to enhance their skills in order to better interact with the media. This is consistent with the requirement that the military justice system be transparent and accessible to the public.

The mock sexual assault interactive demonstration was focused on those prosecutors with the least number of years of experience. The exercise allowed these junior prosecutors to develop their skills through scenario-based training through various stages of the court martial process including the analysis of whether there is a reasonable prospect of conviction, victim preparation, direct examination, cross examination and making submissions in court.

Finally, the CMPS also held a civilian training workshop on 12 February 2019 which focused on topics such as file management, finance and training on the functionality of the new case management system.

In line with Canada’s new Defence Policy, “Strong, Secure, Engaged” and the promotion of psychosocial well-being in the workplace, in 2016 the CMPS, in partnership with the CAF Health Service Group, explored different strategies to improve the mental resiliency of individual prosecutors. Based on the Road to Mental Readiness program, the training was tailored specifically for military prosecutors and focused on:

During the reporting period, a full day of training was provided to those prosecutors who did not receive the training offered last year.

During the last reporting year, CMPS entered into a partnership with the Attorney General for the Province of Ontario and the Public Prosecution Service of Canada for the temporary employment of a CAF legal officer as a Crown prosecutor with these provincial and federal prosecution services.

During the reporting year, two military prosecutors from the Central region worked with the Ottawa Crown Attorney’s Office. As such, these prosecutors acted as second chair during several Ontario Court of Justice trials and one Superior Court of Justice jury trial for cases such as aggravated assault, sexual assault and breach of conditions. These exchanges are invaluable in fostering relationships with other Canadian prosecution services, developing well-rounded advocates, and providing an opportunity to capture lessons learned that help further advance our practices and policies. Our prosecutors also received positive feedback from victims for the manner in which they treated the victims throughout the court process.

During the reporting period, military prosecutors participated in continuing legal education programs organized by the Federation of Law Societies of Canada, the Public Prosecution Service of Canada, the Ontario Crown Attorneys’ Association, le Barreau du Québec, Osgoode Professional Development, the Canadian Institute, the Advocates’ Society and the Nova Scotia Public Prosecution Service. These programs benefited the CAF not only through the knowledge imparted and skills developed but also through the professional bonds developed by individual military prosecutors with their colleagues from the provincial and federal prosecution services.

For a complete breakdown of training opportunities provided by external organizations, please refer to Table 1-3.

Also, legal officers serving outside the CMPS may, with the approval of their supervisor and the DMP, participate in courts martial as “second chair” prosecutors. The objective of this program is “to contribute to the professional development of unit legal advisors as well as to improve the quality of prosecutions through greater local situational awareness”.Footnote 3

The portability of the court martial system means that courts martial can occur anywhere in Canada or overseas. Unlike their civilian counterparts, military prosecutors are often called upon to travel away from their home for significant periods of time to conduct courts martial or appeals as well for various training opportunities. Travel away from home – referred to as temporary duty – has a significant impact on the well-being of CMPS personnel and their families. This year, members of the CMPS were on temporary duty for a total of 704 days. Table 1-4 shows the breakdown of temporary duty for all CMPS personnel for this reporting period.

The DDMP for the Central and Western regions also supervises those prosecutions which occur outside of Canada.

Depending on the caseload for appeal files it is common for other officers within the CMPS to also appear as counsel or co-counsel at the CMAC or the SCC.

The DMP and the Deputy Judge Advocate General Regional Services have an agreement whereby unit legal advisors may participate as second chairs to RMPs in preparation for and conduct of courts martial. Please see DMP Policy Directive #: 009/00 for further information.