Terms, notes and symbols Canadian Armed Forces members need to read and follow the Manual of Drill and Ceremonial. 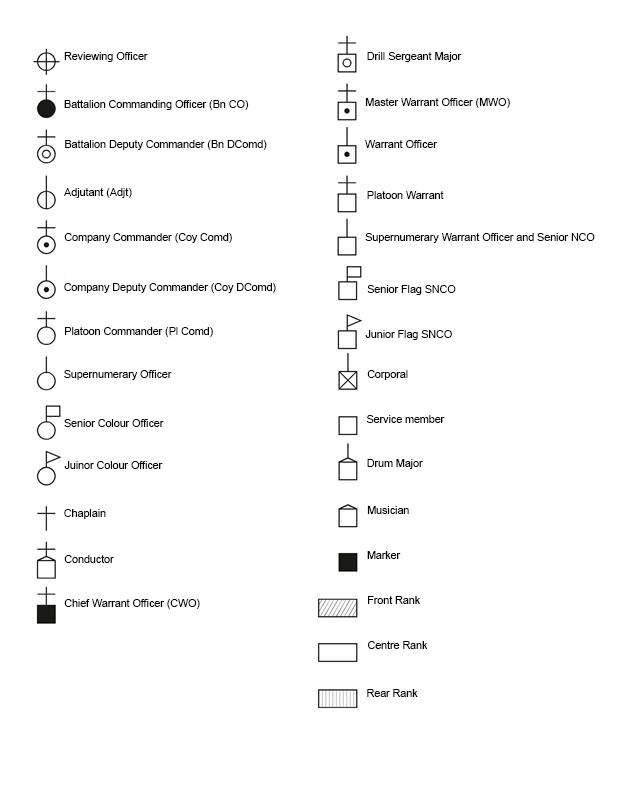 CONDUCT OF A DRILL LESSON

On difficult movements or movements with several stages, a further demonstration may be given prior to practising the complete movement.

Words of Command are given in the primary language of the unit. As such, In a unilingual English language unit then words of command are normally in English only. In units designated as bilingual, both official languages are used. In this case, foot drill will be done in the language of the majority on parade while weapons drill will be conducted in the other official language.

Note: interval between calls shall be 10 seconds for funerals, 1 minute for memorial services and 2 minutes for commemorative services

advance
A unit is advancing when it is moving in the direction the front rank would face in line. (action de couvrir)
alignment
A straight line on which a body of troops is formed or is to form.
appointment
Positions of command within units and sub-units, e.g., company commander, division commander or platoon commander.
battalion
A military formation consisting of two or more companies.
battery
An artillery formation approximately the size of a company.
brigade/air group
A military formation consisting of two or more battalions/wings and supporting formations. (brigade)
cadence
The number of beats to the minute. (cadence)
changing direction
To form a new front, i.e., to change the front of the unit, but not its formation, to face to the right or left.
close order
The normal distance (one pace) between ranks in line.
colours
column
Sub-units one behind the other on parallel and successive alignments, at such a distance from one another that, when formed at an angle of 90 degrees to either flank, they will be brought into line with a seven-pace interval between platoons and a ten-pace interval between companies.
column close
A column with distance reduced to suit requirements, with a minimum distance of 12 paces between platoons and 15 paces between companies.
column of route
A unit turned to the right or left out of line, flank file leading, with officers and supernumeraries positioned to lead or follow the formation.
column of threes
A unit in threes turned to the right or left out of line, flank file leading, but with officers and supernumeraries in their normal positions as in line.
company
A military formation consisting of two or more platoons.
covering
The act of aligning one person or group directly in rear of another.
depth
The extent of ground occupied by a body of service personnel form front to rear.
distance
The space between service personnel or bodies of service personnel from front to rear.
division
dressing
The act of taking up correct alignment and covering.
file, moving to a flank in
A unit in two ranks moving to a flank.
file, single
Service personnel, one behind the other on a frontage of one person.
file, blank
flank
Either side of a body of service personnel, as opposed to its front and rear. Designated as either the right or the left flank
flank, directing
The flank by which units march or dress.
flank, inner
The directing flank serving as a pivot when a body of service personnel changes direction.
flank, outer
The flank opposite the directing flank.
flight
A military formation approximately the size of a platoon.
form
The method of changing direction but not for-mation.
form squad
The method of changing formation but not direction.
front
The direction in which troops are facing or moving. (front)
frontage
The extent of ground covered laterally by a body of service personnel. As a general rule distances are 1.5 paces per file at the full arm dressing and 1 pace per file for all other intervals of dressing.
guides, right or left
Individuals on the right and left of the front rank, whose specific duties are to maintain correct distances, intervals from other units when on the march and on whom the remainder of the members in their unit march, take up and maintain dressing. The guides are not to be covered off (see ‘covering’). Guides may be used to indicate unit and sub-unit parade square positions for fall-in.
incline
To face, and if on the march to move, in a direction of 45 degrees from the front to the indicated flank in a new direction.
interval
The space between individuals or bodies of service personnel on the same alignment.
line
Bodies of service personnel formed up on the same alignment.
marker
An individual placed to indicate the position which a body of service personnel will occupy when covering and falling in.
open order
A standard increased distance (two and one-half paces) between ranks in line.
pace
The length of a standard stride measured from heel to heel.
platoon
A basic military formation of approximately 30 service personnel, normally formed in three ranks, having a right marker, a platoon commander and a platoon warrant officer.
rank
A line of service personnel, side by side, on one alignment, separated by an interval.
rank, front
The rank which is leading when a unit is advancing.
rank, leading
The rank in front whether retiring or advancing.
rank, rear
The rank which is in the rear when the unit is advancing.
retiring
A unit is retiring when it is moving in the direction opposite to that which the front rank would face in line.
ship’s company
The officers and crew of a ship.
standard pause
The pause between movements of drill. The standard pause for drill at the halt is based on two beats of quick time. The standard pause for drill on the march is the period of time required to take two paces.
squad
A small military formation of less than platoon size which is adopted to teach drill movements.
squadron
A military formation approximately the size of a company.
sub-unit
One of the component bodies forming a unit; i.e., a platoon is a sub-unit of a company
supernumeraries
Officers who form in front of and warrant officers and senior non-commissioned officers who form in rear of their respective formations without filling a parade appointment.
troop
A military formation approximately the size of a platoon.
wheel
A movement by which a body of service personnel facing a flank changes direction without changing formation.
wing
A military formation approximately the size of a battalion.