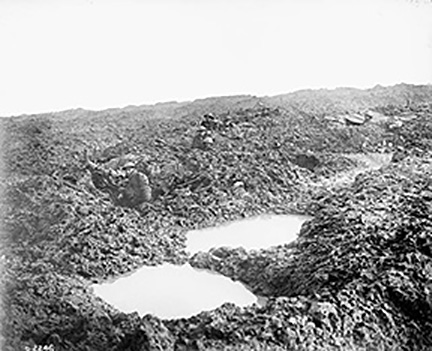 Personnel of the Canadian Machine Gun Corps holding the line in shell holes during the Battle of Passchendaele. The machine-gunner closest to the camera is Private Reginald Le Brun. November, 1917.
Credit: William Rider-Rider/Library and Archives Canada/PA-002162 (MIKAN no. 3233069)

A battle honour formally entitled “Second Battle of Passchendaele” and itself forming part of “The Battles of Ypres, 1917”.Footnote 1

The Honour “Passchendaele” was awarded for the final phase of the 1917 campaign in Flanders. The period covering the honour began on 12 October 1917 as British, Australian and New-Zealand troops began the assault with a view to taking the high ground on which the village of Passchendaele was located. These attacks made little progress. The Canadian Corps was ordered to Flanders at the beginning of October and by the middle of the month preparations, including building and improving roads, were under way. Special attention was paid to locating and repairing artillery positions. The Canadian Corps (Lieutenant-General Sir A.W. Currie) began taking over from the Australians on 18 October as preparations continued. The Canadian plan was to move along the high ground of the Bellevue Spur west of Passchendaele on the left of the Corps area. On the Corps right the attack would be towards the high ground where the village of Passchendaele was located. The centre of the Corps was split by the valley of the Ravebeek, a small course of water that had flooded all the low ground making it almost impassable. The attack would be conducted in three phases and an artillery plan was devised to mislead the Germans as to the actual time of the attack. This first attack was launched on 26 October with the 3rd Division (Major-General L.J. Lipsett) on the left, assaulting the Bellevue Spur, and the 4th Division (Major-General Sir D. Watson) on the right towards Passchendaele. The 4th Division's initial assault was successful in taking their objectives, and although the Germans launched strong counter-attacks the Canadians held on over the next few days, securing the start line for the next phase. The 3rd Division's attack had a less certain outcome meeting fierce German resistance. Only heroic actions kept the attack going; it would take another day of fierce fighting to secure Bellevue and Laamkeek before consolidation began. Three Victoria Crosses were earned in the fighting for this area. With a foothold on the high ground, the Canadian Corps paused to prepare the artillery and move in a new wave of infantry to continue the attack. The next attack was launched in the early morning of 30 October. The 3rd Division continued the advance along the Bellevue Spur. By mid-afternoon on the 30th most of the positions were taken and the Division began to consolidate its gains since the division to their left had not kept up and they had detected that the Germans were preparing a counter-attack. Even if most objectives were taken that day the fighting was still very fierce and three other members of the Division earned the Victoria Cross. On the Corps' right the 4th Division continued towards Passchendaele and successfully captured Crest Farm and objectives east of the Passchendaele-Zonnebeke Road. After the relief of the 3rd and 4th Divisions by the 1st and 2nd, the final phase of the attack was ready to be launched. On 6 November, the first stage of the attack began under a heavy barrage. The 2nd Division (Major-General Sir H.E. Burstall) had the task of taking the village of Passchendaele itself. The Division followed the barrage closely, surprising the Germans before they could man their positions. Most of the German resistance came from the north end of the village on the left flank along the Ravebeek valley. The attack by the 1st Division (Major-General Sir A.C. Macdonell) on the left went well, with the hardest fighting on their left flank as they advanced on the hamlet of Mosselmarkt. At the end of the day, the objectives for 6 November were in Canadian hands. The final task for the Canadian Corps was to take the crest of the Passchendaele Ridge 900 metres north of the village. This attack took place on 10 November and was met with limited resistance from the defenders. However, the German artillery shelled the Canadian positions, in a narrow salient, heavily for most of the night and into the next day. The Canadians held the position. With this ended the British offensives in Flanders for 1917. On 14 November 1917, the relief of the Canadian Corps in this sector began. 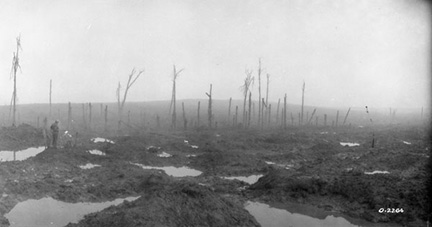 Passchendaele, now a field of mud. November, 1917. (The Battles of Ypres)
Credit: William Rider-Rider/Canada. Department of National Defence/Library and Archives Canada/PA-040141 (MIKAN no. 3643039)