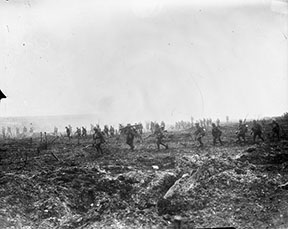 A battle honour formally entitled the “Battle of Vimy Ridge” and itself being part of “The Battles of Arras, 1917”Footnote 1.

The Honour “Vimy, 1917” was awarded to those units that participated in the taking of this ridge. Although the main effort in taking the ridge was by Canadian units several British units also earned this honour. After months of preparation the Canadian Corps (Lieutenant-General Sir J.H.G. Byng) comprising four Canadian and one British division had the principal task of taking this important geographical feature. The 1st (Major-General A.W. Currie), 2nd (Major-General Sir H.E. Burstall) and 3rd (Major-General L.J. Lipsett) Divisions were able to take their objectives successfully on 9 April 1917 but the 4th Division (Major-General Sir D. Watson), with the highest point of the ridge as its objective, had not been able to push the Germans off of Hill 145. This high point was taken the following day allowing the Canadian Corps to then turn its attention to the capture of the feature known as “The Pimple” on the northern most tip of the ridge. Intentionally left to be taken after Hill 145 it would not be until 12 April that the Canadians carried out their successful attack against this feature. The final phases of the “Battle of Vimy Ridge” consisted of pursuing the German retreat to the east to their new defensive positions between Avion, Arleux-en-Gohelle to Oppy and Gavrelle. 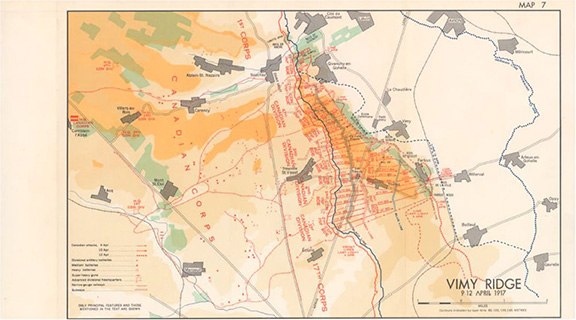 GO 6/28; United Kingdom, War Office, The Official Names of the Battles and Other Engagements fought by the Military Forces of the British Empire during the Great War, 1914-1919, and the Third Afghan War, 1919: Report of the Battles Nomenclature Committee as Approved by the Army Council (London, 1922), p.18