This Honour “Somme, 1916” was awarded to all units that participated in the whole series of battles that were part of the British offensives on the Somme between the 1st July and the 18th of November 1916. Planned as a large offensive to break German lines astride the Somme River it was a joint French and British attack begun on the 1st July 1916. The breakthrough hoped for on that day never materialised so a series of subsequent attacks continued to be planned on various scales in order to break the German lines. Ground was gradually won at a high cost but the hoped-for breakthrough never materialised in almost six months of fighting. The Royal Newfoundland Regiment was the first unit of the present day Canadian Armed Forces to be engaged in the Somme offensive on 1 July. It fought there again later in October 1916. Units of the Canadian Cavalry Brigade (Brigadier-General J.E.B. Seely) participated in the fighting in July 1916. The Canadian Corps (Lieutenant-General Sir J.H.G. Byng) joined the fighting on the Somme at the end of August, the newly formed 4th Canadian Division (Major-General Sir D. Watson), not yet part of the Canadian Corps, arriving there in October. 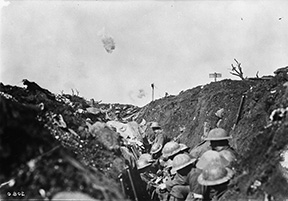 GO 6/28; United Kingdom, War Office, The Official Names of the Battles and Other Engagements fought by the Military Forces of the British Empire during the Great War, 1914-1919, and the Third Afghan War, 1919: Report of the Battles Nomenclature Committee as Approved by the Army Council (London, 1922), pp.16-17