Vice-Admiral Andrew Laurence Collier was the 17th Commander of the Canadian Navy. 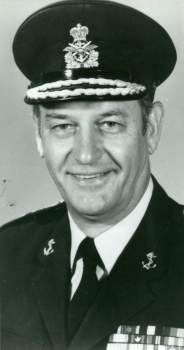 In 1954, he took the RN Advanced Navigation Course at HMS Dryad. Later that year, he became Navigating Officer of the aircraft carrier HMCS Magnificent.

In 1960, Collier assumed command of the destroyer-escort HMCS Skeena. On promotion to Captain in 1962, he took the RN Staff College Course. Later that year, he was made Captain Sea Training to Flag Officer Atlantic Coast.

He was appointed to Naval Service Headquarters (NSHQ) in Ottawa as Director Naval Plans in 1964. The next year, he became Director International Plans at Canadian Forces Headquarters (CFHQ).

In 1966, Collier assumed command of the Seventh Escort Squadron based in Halifax, Nova Scotia. He then moved to Training Command as Deputy Chief of Staff Maritime Training in 1967.

In 1969, he studied at the National Defence College in Kingston, Ontario.

On promotion to Commodore in 1972, he assumed command of the Canadian Flotilla (Atlantic). In 1973, he became Senior Liaison Officer (Navy) at Canadian Defence Liaison Staff in Washington DC. On promotion to Rear-Admiral in 1974, he was appointed Chief of Maritime Operations at National Defence Headquarters (NDHQ). He assumed command of Maritime Forces Pacific in 1975.

He was promoted to his current rank in 1977. Vice-Admiral Collier assumed command of Maritime Command in Halifax, Nova Scotia. He served in this role until he retired in 1979.