Rear-Admiral Walter Hose was the 2nd Commander of the Canadian Navy. 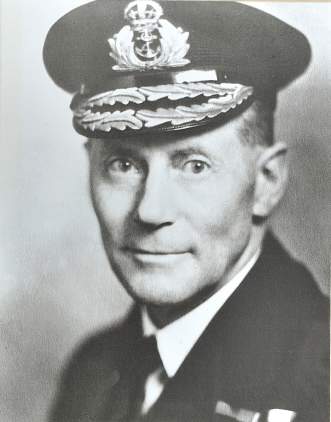 Rear-Admiral Hose was born at sea off the coast of Ceylon in 1875.

In 1896, following training courses at Greenwich and Portsmouth, he commanded HM Torpedo Boat 44. He then served in these British ships:

HMS Tweed was a river gunboat in China, which he commanded.

In 1901, Hose served in the battleship HMS Jupiter. Then he was First Lieutenant (Executive Officer) of the cruiser HMS Charybdis for service on the North America and West Indies Station. This included training the Newfoundland Division of the Royal Naval Reserve (RNR).

Later that year, he take the War Staff Course and the Combined Naval and Military Operations Staff Course.

He assumed command of the cruiser HMS Cochrane, and was promoted to Commander in December 1908.

The RN loaned him to the Royal Canadian Navy (RCN) in 1911. He assumed command of the cruiser HMCS Rainbow, and took charge of the Esquimalt Dockyard. In 1912, he retired from the RN and joined the RCN, remaining in command of Rainbow.

Promoted to Captain in 1918, he was appointed Senior Naval Officer Halifax and Captain of Patrols for the east coast.

Rear-Admiral Hose was promoted to his current rank when he retired from the Royal Canadian Navy in June 1934.