Vice-Admiral Ralph Lucien Hennessy was the 11th Commander of the Canadian Navy. 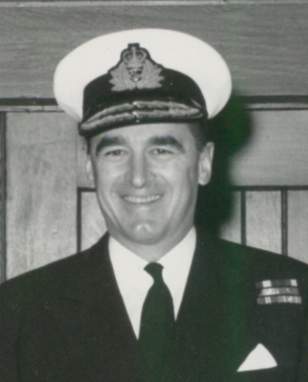 Reverting in rank to Lieutenant-Commander, he commanded the destroyers HMCS Gatineau and HMCS Assiniboine from 1944 to 1945.

In 1945, Hennessy commissioned the destroyer HMCS Micmac as her first Commanding Officer.

In 1947, he took the RCAF staff course in Toronto, Ontario.

Promoted to Commander in 1948, he went to Naval Service Headquarters (NSHQ) as Assistant Chief of Naval Personnel. In 1949, he became Director of Manning at NSHQ.

In 1949 he was appointed to HMCS Stadacona in Halifax, Nova Scotia. He was the Officer-in-Charge, Junior Officers' Technical and Leadership Courses.

In 1951, he became the Commander (Executive Officer) of the cruiser HMCS Quebec. On promotion to Captain in 1953, he assumed command of HMCS Quebec.

In 1953, he studied at the National Defence College in Kingston, Ontario. In 1954, he was given command of the destroyer HMCS Algonquin and made Commander First Canadian Escort Squadron.

In 1956, Hennessy went to London, England, as the Deputy Naval Member, Canadian Joint Staff – London. At the same time, he served as Canadian Member and Chairman of the Naval Board of NATO's Military Organization for Standardization.

In 1958, he returned to NSHQ as Director Naval Training. On promotion to Commodore in 1960, he assumed the duties of Deputy Chief of Naval Personnel. In 1963, he returned to Halifax, Nova Scotia, as Commodore, Personnel to Flag Officer Atlantic Coast (FOAC). Returning to Ottawa in 1964, he served at Canadian Forces Headquarters (CFHQ) as Chairman of Military Manpower Studies.

He was promoted to his present rank in July 1966. Vice-Admiral Hennessy was then appointed to the post of Comptroller-General of the Canadian Armed Forces and Principal Naval Adviser. In 1969, he became Chief of Personnel in CFHQ. He served in this position until he retired in 1970.