Vice-Admiral Howard Emmerson Reid was the 5th Commander of the Canadian Navy. 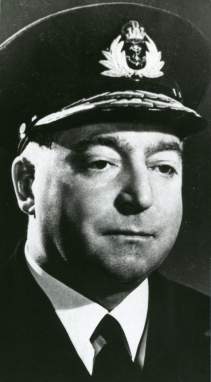 Vice-Admiral Reid joined the Royal Canadian Navy (RCN) as a Cadet in 1912. He studied at the Royal Naval College of Canada (RNCC).

In 1914 he began training with the Royal Navy (RN) in HMS Berwick and with the RCN in HMCS Niobe and HMCS Rainbow.

He returned to Canada to serve in HMCS Guelph in 1922. In 1923, he assumed command of the minesweeping trawler HMCS Festubert. Then he was put charge of the destroyer HMCS Patriot.

In 1925, Reid went to Naval Headquarters (NHQ) in Ottawa. He served as Supervising Officer RCNVR (Royal Canadian Navy Volunteer Reserve). He returned to Britain for training and service:

In 1929, he assumed command of the RN destroyer HMS Sepoy on the China Station. He returned to Canada in 1930 and took the RN Staff College Course in 1931. The next year, he joined the staff of Rear-Admiral 2nd Battle Squadron in the RN battleships HMS Warspite and HMS Valiant.

In 1938, he was appointed Commander-in-Charge HMC Dockyard Halifax. On promotion to Captain in 1939, he was made Commanding Officer Atlantic Coast (COAC).

In 1940, he returned to Naval Service Headquarters (NSHQ) as the Deputy Chief of the Naval Staff. He was promoted to Commodore First Class in 1941. In 1942, he became Commodore Commanding Newfoundland Force (CCNF). In 1943, he was promoted to Rear-Admiral and appointed Naval Member Canadian Joint Staff in Washington, DC.

He was promoted to his current rank in 1946. On the death of Vice-Admiral Jones in February 1946, Vice-Admiral Reid assumed the duties of Chief of the Naval Staff. He held this position until he retired in 1948.