Vice-Admiral Lawrence Edward Murray was the 25th Commander of the Canadian Navy. 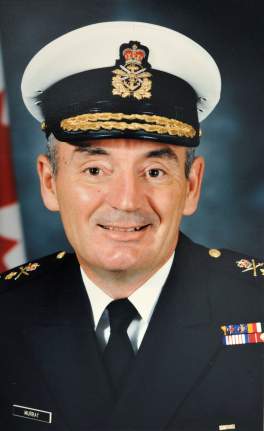 Vice-Admiral Murray joined the Royal Canadian Navy (RCN) as a Cadet in 1964. He studied at Carleton University. Specializing in navigation, he served:

In 1972, he took the Combat Control Officers Course. In 1973, he took the Maritime Advanced Navigation Course.

He was posted to the replenishment ship HMCS Provider in 1974. From 1976 to 1977, he commanded the patrol boat HMCS Chaleur, and served as Commander Training Division Two.

In 1981, he was promoted to Commander. He then served as the Senior Staff Officer Plans at Maritime Command Headquarters (MARCOMHQ) in Halifax. In 1983, he assumed command of the destroyer HMCS Iroquois.

In 1985, on promotion to Captain(N), he was appointed Deputy Chief of Staff Personnel and Training in MARCOMHQ. Then in 1987, he became Commander of the First Canadian Destroyer Squadron.

In 1988, he was promoted to Commodore and took language training. In 1989, he was named Director-General Maritime Doctrine and Operations at National Defence Headquarters (NDHQ) in Ottawa.

In 1991, he was promoted to Rear-Admiral. He assumed the duties of Associate Assistant Deputy Minister (Policy and Communications) at NDHQ. On promotion to his present rank in 1993, Vice-Admiral Murray was named Deputy Chief of the Defence Staff at NDHQ.