Vice-Admiral Drew William Robertson was the 31st Commander of the Canadian Navy. 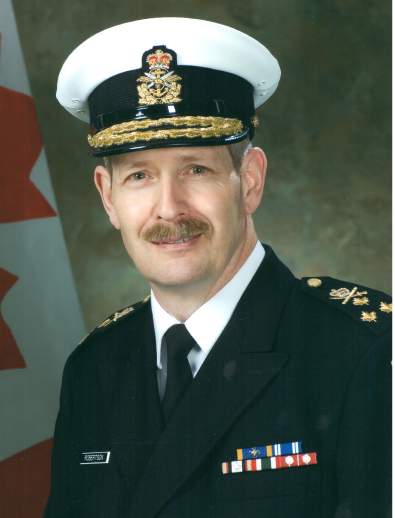 Vice-Admiral Robertson joined the Canadian Forces (CF) as a Cadet in 1973. He studied at the Royal Military College of Canada.

In 1985, he took the year-long Combat Control Officer’s Course. He joined the helicopter-carrying destroyer-escort HMCS Skeena in 1986. In 1988, he served at Maritime Command Headquarters (MARCOM HQ).

In 1990, Robertson went to National Defence Headquarters (NDHQ) J3 Operations during the First Gulf War. In 1992, he studied at the Canadian Forces Command and Staff College in Toronto. He was promoted to Commander.

In 1993, he became Executive Officer in the replenishment ship HMCS Provider. In 1995, he assumed command of the helicopter-carrying destroyer-escort HMCS Annapolis.

He was made staff officer to the Minister of National Defence in 1996. In 1998, on promotion to Captain(N), he became Director of NATO Policy at NDHQ.

He was promoted to his current rank in 2006. Vice-Admiral Robertson was appointed Commander Maritime Command and Chief of the Maritime Staff at NDHQ. He served in this position until he retired in 2009.