Vice-Admiral Charles Morris Winton Thomas was the 21st Commander of the Canadian Navy. 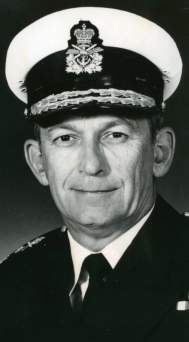 Vice-Admiral Thomas joined the Royal Canadian Navy (RCN) as a Cadet in 1954.

From 1954 to 1957, he trained at the Officer Training Establishment HMCS Venture and at sea on the cruiser HMCS Ontario. Specializing in marine engineering, he studied at the UK Royal Naval Engineering College (RNEC) in 1957. Later that year, he trained in HMCS Margaree. He returned to the RNEC in 1960 for Marine Engineering sub-specialty training.

He returned to Canada in 1961. He served in HMCS Saguenay and HMCS Antigonish, the latter as the Engineering Officer. In 1961, he joined the staff of the Commander Fourth Canadian Escort Squadron in HMCS Jonquière. He served as Squadron Operations and Training Officer.

From 1963 to 1966, he served as Engineering Officer in the ocean escort HMCS New Glasgow. He served in the same role in the destroyer escort HMCS Saskatchewan in 1964.

In 1966, Thomas went to Canadian Forces Headquarters (CFHQ) as Staff Officer Postings and Careers. The next year, he studied at the Canadian Forces Staff College in Toronto.

On promotion to Commander in 1969, he was appointed Executive Officer of the replenishment ship HMCS Preserver. In 1971, he assumed command of the helicopter-carrying destroyer escort HMCS Fraser.

He moved to Esquimalt, British Columbia, as Commander Training Group Pacific in 1976. In 1978, he studied at the National Defence College in Kingston, Ontario. In 1979, he was made Director Maritime Requirements Sea at National Defence Headquarters (NDHQ) in Ottawa.