Vice-Admiral Philip Dean McFadden was the 32nd Commander of the Canadian Navy. 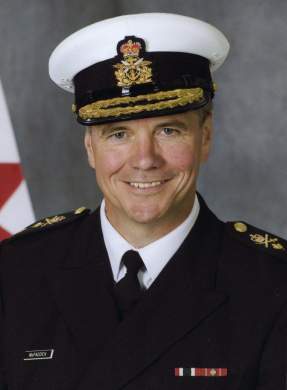 Vice-Admiral McFadden joined the Canadian Forces (CF) as a Cadet in 1974. He studied at Royal Roads Military College.

In 1982, he left the CF to work with the Canadian Coast Guard at Vessel Traffic Services in Vancouver. In 1983, he re-enrolled in the CF serving in:

In 1987, he took the year-long Combat Control Officers Course. Later that year, he was posted to the destroyer-escort HMCS Qu’Appelle.

In 1989, he joined the staff of the NATO Commander-in-Chief Eastern Atlantic at Northwood, United Kingdom. He was supporting the Standing Naval Force Atlantic.

In 1990, he returned to Canada. He served at the Canadian Forces Fleet School Halifax, Nova Scotia. He then joined the staff of the Commander Fifth Canadian Destroyer Squadron. After that, he served with the Seventh Maritime Operations Group.

In 1996, he studied at the Canadian Forces Command and Staff College in Toronto. Later that year, on promotion to Commander he returned to Halifax as Executive Officer of the replenishment ship HMCS Provider. In 1997, he assumed command of the frigate HMCS Montreal.

In 1999, McFadden was named Commander Sea Training (Atlantic). In 2000, he was promoted to Captain(N). He was made Director Maritime Strategy for the Chief of the Maritime Staff at National Defence Headquarters (NDHQ) in Ottawa.

Following year-long language training, he was appointed Director Asia-Pacific Policy at NDHQ in 2002.

In December 2003, he completed Advanced Military Studies at the Canadian Forces College. He returned to the east coast and assumed command of the Fifth Maritime Operations Group.

Promoted Commodore in 2005, he assumed command of the Atlantic Fleet. In 2006, he was promoted to Rear-Admiral and took command of Maritime Forces Atlantic in August of that year.

He was promoted to his current rank in June 2009. Vice-Admiral McFadden returned to NDHQ in Ottawa as the Commander Maritime Command and Chief of the Maritime Staff. He served in this position until he retired in July 2011.