Vice-Admiral Peter William Cairns was the 24th Commander of the Canadian Navy. 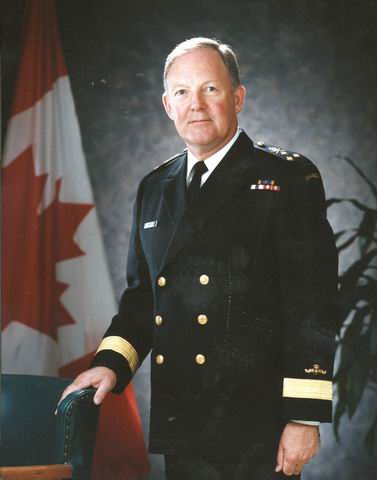 Vice-Admiral Cairns joined the Royal Canadian Navy (RCN) as a Cadet in 1956. He studied at Queen’s University.

In 1965, he specialized in submarines at the Royal Navy (RN) submarine officers training at HMS Dolphin. In 1965, he was appointed Navigating Officer on the British submarine HMS Orpheus.

Cairns studied at the US Naval War College in Newport, Rhode Island, in 1975.

At the same time, he was the Deputy Commandant of the Canadian Forces Fleet School in Halifax, Nova Scotia.

Promoted to Captain(N) in 1979, he served as the Command Personnel and Training Officer at Maritime Command Headquarters (MARCOMHQ). Later that year, he was named Commandant of the Canadian Forces Maritime Warfare School.

He was promoted to Rear-Admiral in 1987. He served as Deputy Chief of Staff Operations to NATO’s Supreme Allied Commander Atlantic in Norfolk, Virginia.

He was promoted to his current rank in 1992. Vice-Admiral Cairns was appointed Commander Maritime Command in July 1992. He served in this position until he retired in August 1994.