Vice-Admiral Kenneth Lloyd Dyer was the 10th Commander of the Canadian Navy. 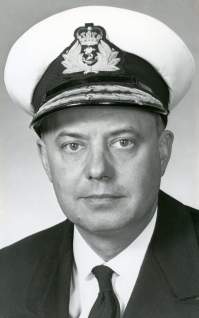 He also trained on shore at the “stone frigates” HMS Dryad, HMS Excellent and HMS President.

In 1938 he returned to Canada, serving in HMCS Stadacona and HMCS Saguenay.

In 1938 he specialized in gunnery, taking the RN Gunnery course at HMS Excellent. He then got two appointments:

In 1941, he was appointed Executive Officer of HMCS Niobe and was later made its Commanding Officer.

In 1948, he attended the Royal Navy staff course, as well as the Joint Services Staff College.

In 1951, he assumed command of the aircraft carrier HMCS Magnificent. Promoted to Commodore in 1953, he was appointed Commodore RCN Barracks Esquimalt.

In 1954, he returned to NSHQ as Assistant Chief of Naval Staff (Warfare). He became Naval Comptroller in 1956. Later that year, he took the National Defence Course of Canada in Kingston, Ontario.

He was promoted to Vice-Admiral in August 1964. Vice-Admiral Dyer became Chief of Personnel and Principle Naval Adviser in the newly formed Canadian Forces Headquarters (CFHQ) in Ottawa. He served in this position until he resigned from the RCN in 1966 in opposition to the policy of unification.