Vice-Admiral Gregory Ralph Maddison was the 28th Commander of the Canadian Navy. 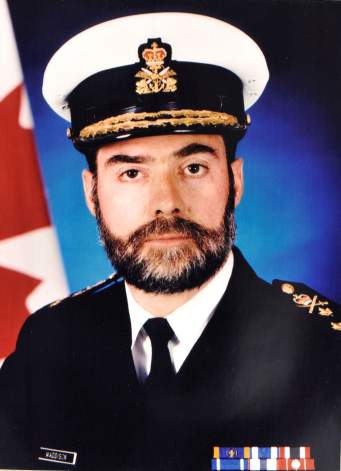 Vice-Admiral Maddison joined the Royal Canadian Navy (RCN) as a Cadet in 1968. He studied at the Royal Military College of Canada.

In 1977, he took the year-long Combat Control Officers Course. He then joined the destroyer-escort HMCS Terra Nova in 1978. In 1979, he served as Combat Officer Sea Training Pacific.

In 1981, he studied at the Canadian Forces Command and Staff College in Toronto. He returned to Halifax in 1983 as Executive Officer of the destroyer HMCS Iroquois.

He was promoted to Commander in 1985, following year-long language training. In 1986, he assumed command of the destroyer HMCS Athabaskan.

In 1988, he was promoted to Captain(N). He was appointed Director of Maritime Operations Plans and Reserves at National Defence Headquarters (NDHQ) in Ottawa.

In 1990, he studied at the National Defence College in Kingston. He assumed command of the First Canadian Destroyer Squadron in Halifax in 1991. In 1992, he was promoted to Commodore. He was put in command of NATO’s Standing Naval Force Atlantic (STANAVFORLANT) in 1993.

In 1994, he returned to Canada. He became Assistant Chief of Staff Personnel and Training at Maritime Command Headquarters (MARCOMHQ) in Halifax. In January 1997, he assumed command of Maritime Forces Atlantic in Halifax. He was promoted to Rear-Admiral in April 1997.

He was promoted to his present rank later in 1997. Vice-Admiral Maddison was appointed Commander Maritime Command and Chief of the Maritime Staff at NDHQ in Ottawa in September 1997.

He was named Deputy Chief of the Defence Staff at NDHQ in July 2001. He served in this position until he retired in 2004.