Vice-Admiral Henry Allan Porter was the 14th Commander of the Canadian Navy. 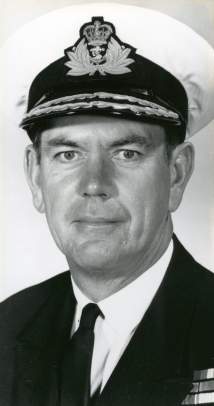 In 1942, as a Petty Officer, he was chosen for officer training. He was promoted to Sub-Lieutenant, specializing in communications and serving in HMCS Kootenay and HMCS St Hyacinthe.

In 1947, he qualified as a pilot and served with the aircraft carrier HMCS Magnificent.

From 1952 to 1953, he commanded the ocean escorts HMCS La Hulloise and HMCS Lauzon.

Porter became officer in charge of the communications school at HMCS Cornwallis in 1954. He was promoted to Commander in July of that year.

In 1955, he became Director of Naval Communications at Naval Service Headquarters (NSHQ) in Ottawa.

Two years later, he joined the staff of the Flag Officer Pacific Coast. At first he was the Armed Forces Co-ordinator of British Columbia Centennial activities. Then he was Commander Fourth Canadian Escort Squadron and Commander Cadet Training.

In 1960, he was promoted to Captain. Porter returned to NSHQ as the Director of Naval Training. He was later appointed Naval Assistant to the Chief of the Naval Staff.

After the integration of Canadian Forces Headquarters (CFHQ) in 1964, he served as Naval Adviser to the Chief of Personnel.  In April 1965, he assumed command of the aircraft carrier HMCS Bonaventure. The next year, he was made Director-General Maritime Forces at CFHQ.

On promotion to Commodore in 1966, Porter became Director-General Equipment Requirements at CFHQ. In September of that year, he was named Senior Canadian Officer Afloat Atlantic in Halifax, Nova Scotia.  Promoted to Rear-Admiral in September 1969, he was appointed Commander Maritime Forces Pacific.

In July 1970, he was appointed Commander Maritime Command and then promoted to Vice-Admiral in January 1971. In November 1971, Vice-Admiral Porter became Comptroller General at CFHQ. After that, he became Assistant Deputy Minister (Evaluation) on NDHQ restructuring until he retired in 1974.