Vice-Admiral Malcom Bruce MacLean was the 30th Commander of the Canadian Navy. 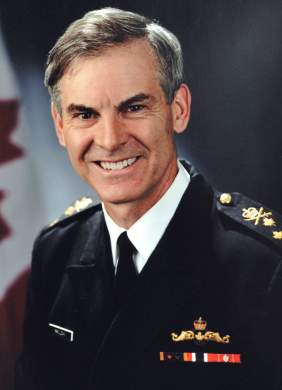 Vice-Admiral MacLean joined the Canadian Forces (CF) as a Cadet in 1970. He studied at Dalhousie University. In 1973, he specialized in submarines at the Royal Navy (RN) submarine officer training at HMS Dolphin.

In 1973, he was posted to the submarine HMCS Okanagan. In 1976, he left the CF to earn a Master’s degree in Business Administration at the University of Western Ontario.

In 1978, he re-enrolled in the CF. His first postings were in the submarines HMCS Okanagan and HMCS Ojibwa.

In 1982, he completed the RN Submarine Commanding Officer Qualifying Course (Perisher). He assumed command of the submarine HMCS Okanagan.

In 1985, he returned to Canada as the Squadron Operations Officer in the First Canadian Submarine Squadron. In 1986, he was promoted to Commander. He served in the Directorate of Submarine Requirements at National Defence Headquarters (NDHQ) in Ottawa. He later became Director Maritime Force Development, also at NDHQ.

On promotion to Captain(N) in 1989, he took year-long language training. In 1992, he assumed command of the replenishment ship HMCS Provider. He was appointed Chief of Staff to the Commander Maritime Forces Pacific in 1994.

In 1995, he was promoted to Commodore. He returned to Ottawa as Director General Maritime Development at NDHQ. In 1997, he was seconded to the Privy Council Office.

Promoted to Rear-Admiral in 1998, he became Director-General International Security Policy at NDHQ. In 2000, he assumed command of Maritime Forces Atlantic. He was promoted to his present rank in 2002. Vice-Admiral MacLean was named Canadian Military Representative to the NATO Military Committee in Brussels, Belgium.

In 2004, he returned to Canada as the Commander Maritime Command and Chief of the Maritime Staff at NDHQ. He served in this position until he retired in January 1996.