Vice-Admiral John Allan was the 18th Commander of the Canadian Navy. 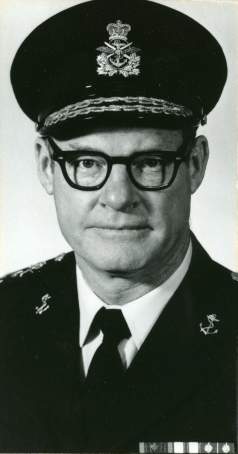 Vice-Admiral Allan joined the Royal Canadian Navy (RCN) as an Ordinary Seaman in 1946.

He served in HMCS Shearwater before attending Queen’s University in Kingston in 1950.

He left the RCN in 1952 as a Petty Officer 2nd class. The next year, he re-enrolled as an Officer Cadet. He continued his studies at Queen’s University, graduating in 1955.

He specialized first as an Electrical Officer, then as a Weapons Officer.

In 1964, he went to Canadian Forces Headquarters (CFHQ) on the staff of the Director Systems Engineering. On promotion to Commander in 1966, he served as Staff Director Hydrofoil Development. He later served as Hydrofoil Fighting Equipment Project Officer.

He assumed command of the destroyer-escort HMCS Qu’Appelle in 1968. On promotion to Captain (N) in 1970, he returned to Ottawa as the Project Manager DDH-280 Programme.

In 1975, he became Director General Maritime Engineering and Maintenance at National Defence Headquarters (NDHQ) in Ottawa. On promotion to Rear-Admiral in 1977, he assumed the duties of Associate Deputy Minister (Materiel) at NDHQ.

On promotion to his present rank in 1979, Vice-Admiral Allan was appointed Commander Maritime Command. In 1980, he was made Deputy Chief of the Defence Staff at NDHQ. He served in this position until he retired in 1982.