Vice-Admiral Robert Earl Douglas George was the 22nd Commander of the Canadian Navy. 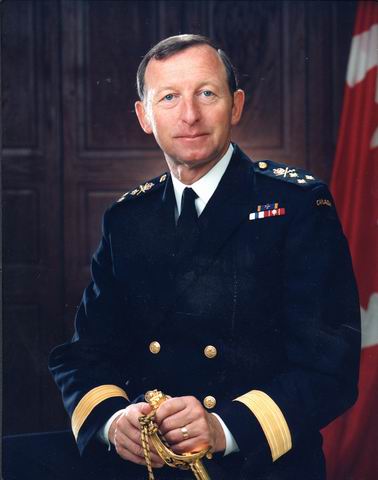 Vice-Admiral George joined the Royal Canadian Navy (RCN) as a Cadet in 1961. He studied at the University of British Columbia. From 1961 to 1965, he trained in:

In 1965, he specialized in operations, taking the Long Operations Course at HMCS Stadacona. He went to HMCS Saguenay in 1966, and in 1967 to HMCS Nipigon.

In 1968, he took the United States Navy (USN) Programming Course. He then joined Canadian Forces Headquarters (CFHQ) in Ottawa in the Directorate of Maritime Combat Systems.

In 1979, he was promoted to Captain(N) to study Japanese. He served as the Canadian Forces Defence Attaché in Tokyo in 1980.

In 1982, he returned to Canada as Commander Second Canadian Destroyer Squadron in Esquimalt, British Columbia. On promotion to Commodore in 1984, he went to Ottawa. He became Director-General Maritime Doctrine and Operations at National Defence Headquarters (NDHQ).

On promotion to Rear-Admiral in 1987, George assumed command of Maritime Forces Pacific. In October 1987, he took on the additional duty of Deputy Commander Maritime Command.

On promotion to his current rank in 1989, Vice-Admiral George returned to Halifax as Commander Maritime Command. In July 1991, he was appointed Deputy Chief of the Defence Staff at NDHQ.

In August 1992, he became the Canadian Military Representative to NATO’s Military Committee in Brussels, Belgium. He served in this position until he retired in 1995.