Admiral John Rogers Anderson was the 23rd Commander of the Canadian Navy. 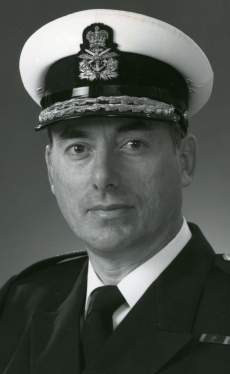 Admiral Anderson joined the Royal Canadian Navy (RCN) as a Cadet in 1959. He studied at the University of British Columbia.

In 1966, he specialized in operations, taking the Long Operations Course at HMCS Stadacona. He was appointed to the aircraft carrier HMCS Bonaventure in 1968. In 1970, he joined the CCS 280 Programming Team as a Programmer at Canadian Forces Headquarters (CFHQ) in Ottawa.

In 1974, he became Executive Officer in the destroyer HMCS Iroquois. In 1975, he studied at the Canadian Forces Command and Staff College in Toronto.

He was promoted to Commander in 1976. He served at National Defence Headquarters (NDHQ) as the Section Head of the Operations Staff Section.

In 1978, Anderson assumed command of the destroyer-escort HMCS Restigouche. In 1980, he was named Commandant of the Naval Officers Training Centre Venture. On promotion to Captain(N) in 1982, he was appointed Commander of the First Canadian Destroyer Squadron in Halifax, Nova Scotia.

In 1983, he became Director Maritime Requirements (Sea) at NDHQ. Promoted to Commodore in 1986, he was appointed Director General Maritime Doctrine and Operations at NDHQ.