Vice-Admiral James Andrew Fulton was the 19th Commander of the Canadian Navy. 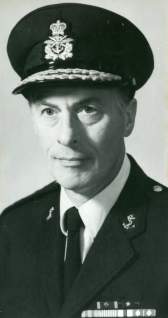 Specializing in Gunnery, he took the RN Long Gunnery course in 1952 at HMS Excellent. He was then made an instructor of HMS Excellent.

In 1955, he returned to Canada. He served as Squadron Gunnery Officer for the Second Canadian Escort Squadron in the destroyers HMCS Athabaskan and HMCS Crescent.

He took the Guided Missile course at the UK Royal Military College of Science in 1956.

In 1961, he assumed command of the ocean escort HMCS Outremont.

In 1962, Fulton returned to NSHQ as the Programme Manager Missile Systems. Promoted to Commander in 1963, he was appointed Director of Naval Operations in NSHQ in 1964.

In 1965, he assumed command of the destroyer-escort HMCS Gatineau.

On promotion to Captain(N) in 1966, he was appointed Deputy SACLANT Representative to NATO in Paris, France.

In 1969, he assumed command of the replenishment ship HMCS Provider.

In 1972, he studied at National Defence College in Kingston, Ontario.

He was promoted to Commodore in 1973. He assumed command of Northern Region Command in Yellowknife, Northwest Territories. He returned to National Defence Headquarters (NDHQ) in Ottawa in 1975 as Director General Current Policy. On promotion to Rear-Admiral in 1976, he was named Chief of Personnel Careers and Senior Appointments at NDHQ.

He was promoted to his current rank in 1978. Vice-Admiral Fulton was then appointed Canadian Military Representative to NATO’s Military Committee in Brussels, Belgium.

In August 1980, he returned to Canada to take up his appointment as the Commander Maritime Command. He served in this position until he retired in 1983.