Vice-Admiral Gary Leslie Garnett was the 27th Commander of the Canadian Navy. 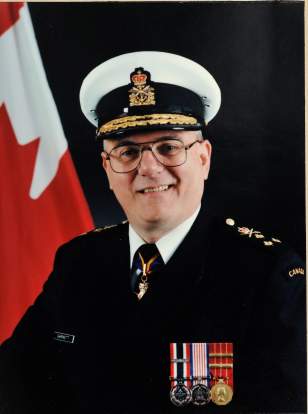 Vice-Admiral Gary Garnett joined the Royal Canadian Navy (RCN) as a Cadet in 1963. He studied at Carleton University, then served in:

In 1970, he specialized in weapons, taking the Long Weapons Course. In 1971, he was posted to the helicopter-carrying destroyer-escort HMCS Annapolis.

From 1974 to 1976, he served in the UK. He was a member of the Royal Navy Commander-in Chief Fleet’s Operational Evaluation Group. Then he took the Royal Navy Staff College Course in Greenwich.

In 1976, he returned to Canada to serve as a staff officer in the First Canadian Destroyer Squadron. He became Executive Officer of the destroyer HMCS Algonquin in 1978.

On promotion to commander in 1980, Garnett was made a member of the Ghana Armed Forces Staff College.

In 1986, he was promoted to Captain(N). He was appointed Commander of the Second Canadian Destroyer Squadron, based in Esquimalt, British Columbia. Following a year of language training, he was appointed Director Military Operations Coordination at National Defence Headquarters (NDHQ) in 1990. Later that year, he was made Executive Assistant to the Chief of the Defence Staff.

On promotion to Commodore in 1991, he took on the duties of Director General Maritime Development. In 1993, he was promoted to Rear-Admiral, and became Chief Personnel Services at NDHQ. He returned to Halifax, Nova Scotia, to assume command of Maritime Forces Atlantic in July 1994.

Vice-Admiral Garnett assumed command of Maritime Command in January 1997. He was promoted to his current rank in April 1997. While still Commander Maritime Command, he became First Chief of the Maritime Staff in May 1997. He worked at NDHQ in Ottawa.

In September 1997, he was appointed Vice-Chief of the Defence Staff. He served in this position until he retired in September 2001.