Vice-Admiral Paul Andrew Maddison was the 33rd Commander of the Canadian Navy. 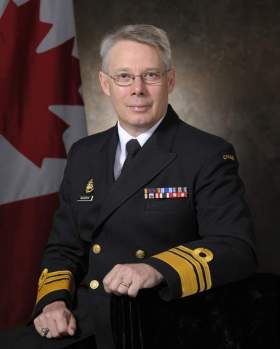 Vice-Admiral Maddison joined the Canadian Armed Forces (CAF) as a cadet in 1975. He studied at the Collège Militaire Royal de St. Jean.

He served in HMCS Terra Nova and HMCS Qu’Appelle, specializing in above water warfare.

In 1985, he was made an Aide-de-Camp to the Governor General of Canada.

In 1987, he took the year-long Combat Control Officers Course. In 1988, he was made Combat Officer of the helicopter-carrying destroyer-escort HMCS Skeena.

In 1990, Maddison was appointed Staff Anti-Submarine Officer to NATO’s Commander Standing Naval Forces Atlantic (STANAVFORLANT). In 1991, he was made Staff Weapons Officer to the Commander Canadian Task Group. The group deployed to the Persian Gulf during the First Gulf War. In 1992, he was named Combat Officer Sea Training Atlantic.

Promoted to Commander in 1997, he was named Commandant of Canadian Forces Fleet School Esquimalt. Soon after, he assumed command of the frigate HMCS Calgary.

In 1999, he was appointed to the Joint Space Control Center in Colorado Springs, Colorado, USA.

In 2002, on promotion to Captain(N), he assumed command of the destroyer HMCS Iroquois.

In 2004, he took the Advanced Military Studies Course at the Canadian Forces College. He next went National Defence Headquarters (NDHQ) as the Director-General Maritime Force Development in 2005.

Maddison was promoted to Commodore in 2006. He was put in command of the experimental Standing Contingency Force. Later that year, he returned to his post as Director-General Maritime Force Development. He was made Assistant Chief of Military Personnel at NDHQ in 2007.

He was promoted to his current rank in July 2011. Vice-Admiral Maddison was appointed Commander Maritime Command and the Chief of the Maritime Staff.