Rear-Admiral Robert Walter Timbrell was the 15th Commander of the Canadian Navy. 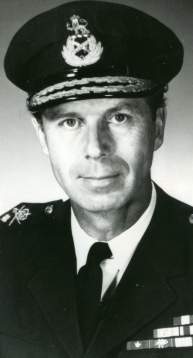 Specializing in Anti-Submarine Warfare (ASW), he took the RN Long Anti-Submarine Course at HMS Osprey in 1942. From 1943 to 1945, he served on the staff of the ASW school at HMCS Cornwallis.

Later, he became Staff Officer Anti-Submarine for Escort Groups 5 and 11. He served in the destroyers HMCS Ottawa and HMCS Qu’Appelle, respectively.

In 1945, Timbrell was appointed First Lieutenant (Executive Officer) of the destroyer HMCS Micmac. In 1946, he became Officer-in-Charge of the ASW School at HMCS Stadacona in Halifax, Nova Scotia.

In 1948, he assumed command of the ocean escort HMCS Swansea. He went to Naval Service Headquarters (NSHQ) in Ottawa in 1949 as Staff Officer (Torpedo Anti-Submarine).

Two years later, he became Training Officer of the cruiser HMCS Ontario.  On promotion to Commander in 1952, he was made Vice-Commandant of the Canadian Service College (CSC) Royal Roads.

In 1955, he assumed command of the new destroyer-escort HMCS St Laurent when it was commissioned. He became Executive Officer of the naval air station HMCS Shearwater in 1957.

On promotion to Captain in 1958, he returned to NSHQ as the Director of Undersea Warfare. In 1960, he was appointed Assistant Director Plans in SACLANT Headquarters in Norfolk VA.

He returned to Canada in 1963 to assume command of the aircraft carrier HMCS Bonaventure. In 1965, he was named Director of Cadets in Canadian Forces Headquarters (CFHQ) in Ottawa.  Later in 1965, he was promoted to Commodore. He became Chief of Staff to Training Command Headquarters in Winnipeg, Manitoba.

He was promoted to his current rank in September 1967. He was appointed Deputy Chief of Staff Plans at CFHQ. Then, he became Commander Canadian Defence Liaison Staff in Washington, DC.

In October 1971, Rear-Admiral Timbrell assumed command of Maritime Command in Halifax. He served in this position until he resigned in 1973 in opposition to the policy of unification.