Vice-Admiral Lynn Gordon Mason was the 26th Commander of the Canadian Navy. 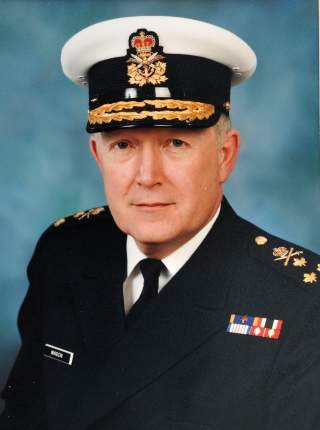 Vice-Admiral Mason joined the Royal Canadian Navy (RCN) as a Cadet in 1960.

In 1971, he specialized in operations at the Long Operations Course. In 1972, he went to the destroyer HMCS Algonquin. In 1974, he was made Combat Officer on the staff of the First Canadian Destroyer Squadron. In 1975, he became Executive Officer in the helicopter-carrying destroyer-escort HMCS Fraser.

He studied at the Canadian Forces Command and Staff College in Toronto in 1976. Promoted to Commander in 1977, he served in the Assistant Deputy Minister Policy Group at National Defence Headquarters (NDHQ).

In 1979, he became Executive Officer of the replenishment ship HMCS Protecteur. In 1981, he assumed command of the destroyer HMCS Iroquois.

Mason returned to the Canadian Forces Staff College in 1982, on staff as a Syndicate Director. He was promoted to Captain(N) in 1984. He remained at the Staff College, serving as Deputy Commandant and Director of Maritime Studies.

In 1985, he was appointed Commander of the Fifth Canadian Destroyer Squadron in Halifax. In 1987, he was promoted to Commodore. He then assumed command of the NATO Standing Naval Forces Atlantic (STANAVFORLANT).

He returned to the Canadian Forces Staff College in 1988 as Commandant.

He was promoted to Rear-Admiral in 1989. He served as the Deputy Chief of Staff Operations at NATO Supreme Allied Commander Atlantic (SACLANTHQ) in Norfolk, Virginia.

He returned to Ottawa in 1991 to become Chief of Maritime Doctrine and Operations at NDHQ. In 1992, he served briefly as Maritime Command Chief of Staff while standing up Maritime Forces Atlantic (MARLANT) in Halifax. He then commanded MARLANT from 1992 to 1994.

He was promoted to his current rank in 1994. Vice-Admiral Mason was named Deputy Chief of the Defence Staff at NDHQ.

In 1995, he was appointed Commander Maritime Command. He served in this position until he retired in 1997.