Vice-Admiral Harold Taylor Wood Grant was the 6th Commander of the Canadian Navy. 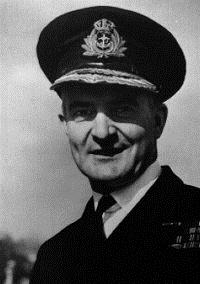 Vice-Admiral Grant joined the Royal Canadian Navy (RCN) as a Cadet in 1914. He studied at the Royal Naval College of Canada (RNCC).

He also trained with the RCN in HMCS Aurora and HMCS Patriot.

In 1924, Grant specialized in navigation, training at HMS Dryad. He then went to HMCS Patrician.

In 1927, he took advanced navigation training at HMS Dryad. This led to appointments as Navigating Officer in the RN battleships HMS Warspite and HMS Queen Elizabeth.

In 1929, he returned to Canada as Staff Officer to the Commander-in-Charge Halifax. In 1931, he became First Lieutenant (Executive Officer) of the destroyer HMCS Saguenay. He joined Naval Headquarters (NHQ) in Ottawa as Director Naval Plans in 1934.

Promoted to Commander in 1935, he served as Director Naval Reserves in NHQ. The next year, he took the RN Staff College Course. He then joined the staff of the RN Commander-in-Chief Atlantic Fleet in the battleship HMS Nelson.

In 1938, Grant assumed command of the destroyer HMCS Skeena. In 1940, he was promoted to Captain. He was appointed Chief of Naval Personnel at Naval Service Headquarters (NSHQ).

On promotion to his current rank in 1947, Vice-Admiral Grant was appointed Chief of the Naval Staff. He served in this position until he retired in 1951.