Vice-Admiral Harry George DeWolf was the 8th Commander of the Canadian Navy. 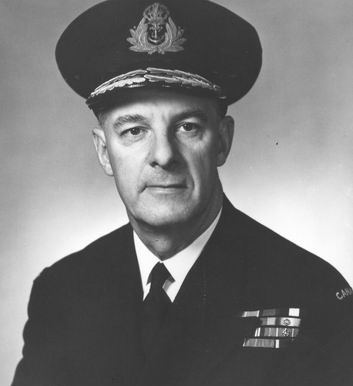 Vice-Admiral DeWolf joined the Royal Canadian Navy (RCN) as a Cadet in 1918. He studied at the Royal Naval College of Canada (RNCC).

He also trained on shore at the “stone frigates” HMS Excellent and HMS President. In Canada, he trained in HMCS Stadacona and HMCS Patriot. In 1928, he specialized in navigation, taking the Long Navigation Course at HMS Dryad, then serving in:

In 1937, he took the RN Staff College Course. Later that year, he served in the cruiser HMS London. He served as Staff Officer Operations to the RN Rear-Admiral Commanding First Cruiser Squadron.

In 1938, he returned to Canada on the staff of Captain (D) in the destroyer HMCS Ottawa. In 1939, he assumed command of the destroyer HMCS St. Laurent. On promotion to Commander in 1940, he was appointed Staff Officer Operations to the Commanding Officer Atlantic Coast (COAC).

In 1941, he was made an acting Captain, Chief Staff Officer COAC., He joined Naval Service Headquarters (NSHQ) as Director Plans in 1942.

In 1943 he assumed command of the destroyer HMCS Haida as a Commander. He was promoted to substantive Captain in 1944. As an acting Commodore, he went to NSHQ, serving as Assistant Chief of the Naval Staff.

On promotion to Rear-Admiral in 1948, he was named Flag Officer Pacific Coast (FOPC). In 1950, he returned to NSHQ as Vice Chief of the Naval Staff. In 1952, he was appointed Principle Military Adviser to the Canadian Ambassador and Chairman Canadian Joint Staff in Washington, DC.

He was promoted to his current rank in 1956. Vice-Admiral DeWolf returned to NSHQ in Ottawa as the Chief of the Naval Staff. He served in this position until he retired in 1960.