Vice-Admiral Herbert Sharples Rayner was the 9th Commander of the Canadian Navy. 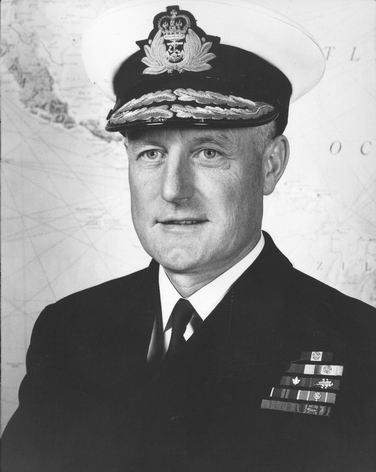 In 1933, he returned to Canada to serve in HMCS Champlain. In 1935, he specialized as a Torpedo Officer, taking the RN Torpedo Officer course at HMS Vernon. He then joined the battleship HMS Renown in 1936. In 1937, he returned to Canada as the First Lieutenant (Executive Officer) in the destroyer HMCS Skeena. In 1940, he assumed command of the destroyer HMCS St. Laurent.

In 1942, he was appointed Staff Officer (Operations) to the Commanding Officer Atlantic Coast.

The next year, Rayner returned to sea in command of the destroyer HMCS Huron.

In 1944, he was promoted to Commander. He went to Naval Service Headquarters (NSHQ) in Ottawa as the Director of Plans. In 1945, as an acting Captain, he returned to Halifax as Captain (D).

Later in 1945, he assumed command of the destroyer HMCS Nootka.

In 1947, he assumed command of the RCN Air Station Dartmouth. He was promoted to Captain in 1948. He was named Commandant of the Canadian Services College Royal Roads in Victoria, British Columbia.

In 1949, he took the National Defence Staff Course in Kingston, Ontario.

The next year, he returned to Ottawa as Secretary to the Chiefs of Staff Committee. In 1951, as an acting Commodore, he became the Coordinator of the Joint Staff.

Promoted to Commodore in 1953, he assumed command of the aircraft carrier HMCS Magnificent. In 1955, he returned to NSHQ as the Naval Assistant to the Chief of the Naval Staff.

Promoted to Rear-Admiral in July 1955, he was appointed Chief of Naval Personnel. In 1957, he was made Flag Officer Pacific Coast (FOPC) in Esquimalt, British Columbia.

On promotion to his current rank in 1960, Vice-Admiral Rayner returned to NSHQ as Chief of the Naval Staff. He served in this position until he retired early from the Navy in 1964, when he opposed the policy of integration.