Vice-Admiral Douglas Seaman Boyle was the 16th Commander of the Canadian Navy. 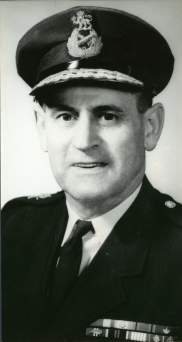 Specializing in navigation, he took the RN Long Navigation and Direction Course at HMS Dryad in 1946.

In 1947, he became Direction Officer in the cruiser HMCS Ontario. He went to Naval Staff Headquarters (NSHQ) as Staff Officer Naval Direction in 1948.

In 1952, he was appointed Navigating Officer of the aircraft carrier HMCS Magnificent. Then, he took the RN staff college course in 1954.

In 1955, Boyle returned to NSHQ in Ottawa as the Deputy Director Naval Training. He was promoted to Commander in 1956. The next year, he assumed command of the destroyer-escort HMCS Athabaskan. In 1959, he assumed command of destroyer-escort HMCS Saguenay. Later that year, he became Assistant Chief of Staff (Training and Administration) to Flag Officer Pacific Coast.

Promoted to Captain in 1963, he assumed command of the Fourth Escort Squadron based in Esquimalt, British Columbia.

In 1964, he returned to NSHQ as Director of Naval Training. In December of that year, he moved to the new Canadian Forces Headquarters (CFHQ) as Director Senior Appointments (Navy). On promotion to Commodore in 1966, he became Director-General Postings and Careers at CFHQ.

In 1969, he studied at the Imperial Defence College in UK.

Boyle assumed command of NATO’s Standing Naval Forces Atlantic (STANAVFORLANT) in 1970. In 1971, he returned to Canada as Director General Plans, Requirements and Production at CFHQ. In 1972, he was promoted to Rear-Admiral. He was appointed Chief of Personnel at National Defence Headquarters (NDHQ) in Ottawa.

In August 1973, he assumed command of Maritime Command in Halifax, Nova Scotia. In January 1975, Vice-Admiral Boyle was promoted to his current rank. He remained Commander Maritime Command until he retired in 1977.