Vice-Admiral James Crilly Wood was the 20th Commander of the Canadian Navy. 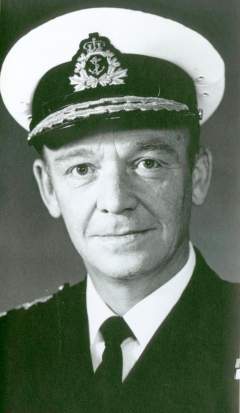 Vice-Admiral Wood enrolled in the Royal Canadian Navy (RCN) in 1951 as a seaman.

In 1954, he began officer training at Royal Roads Military College. Then he trained with the Royal Navy (RN) at the Royal Naval College Greenwich, and served in HMCS Athabaskan. Specializing in submarines, he trained at the United States Navy (USN) submarine school in Groton CT in 1959.

In 1967, he completed the Submarine Commanding Officer’s Qualifying Course (Perisher). He assumed command of the Oberon-class submarine HMCS Ojibwa.

In 1969 he studied at the Canadian Forces Staff College in Toronto, Ontario. On promotion to Commander in 1970, he joined National Defence Headquarters (NDHQ) in Ottawa. He became a Section Head in the Directorate of Equipment Requirements Maritime Systems.

In 1972 he returned to Halifax, Nova Scotia, and assumed command of the First Canadian Submarine Squadron. Wood was promoted to Captain(N) in 1974. He became Deputy Chief of Staff Operational Readiness at Maritime Command Headquarters (MARCOMHQ) in Halifax, Nova Scotia.

In 1976, he assumed command of the replenishment ship HMCS Protecteur.

In 1977, he returned to MARCOMHQ for a short time as the Deputy Chief of Staff Plans. Later that year, he went to study at the UK Royal College of Defence Studies.

Promoted to his current rank in 1983, Vice-Admiral Wood was appointed Commander Maritime Command in July 1983. He served in this position until he retired in 1987.