Vice-Admiral Edmond Rollo Mainguy was the 7th Commander of the Canadian Navy. 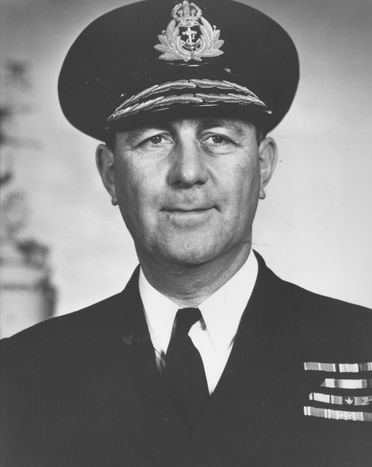 Vice-Admiral Mainguy joined the Royal Canadian Navy (RCN) as a Cadet in 1915. He studied at the Royal Naval College of Canada (RNCC).

He also trained with the RCN in HMCS Aurora and HMCS Patriot.

In 1923, he specialized in signals, taking the RN Long Signals Course in HMS Victory.

He joined HMCS Naden in Victoria, British Columbia. Then, he went to Naval Headquarters (NHQ) in Ottawa. In 1928, he served as Flag Lieutenant to the RN Rear-Admiral Commanding First Cruiser Squadron in the cruiser HMS Frobisher.

In 1930, Mainguy returned to Canada as the Flag Lieutenant (Communications Officer) in HMCS Vancouver. In 1931, he joined the staff of the RN Commander American and West Indies Station. Then he was appointed to NHQ as Signals and W/T Officer and Staff Officer Intelligence in 1932.

In 1934, he returned to Halifax. He became the First Lieutenant (Executive Officer) in the destroyer HMCS Saguenay and Signals Officer for the East Coast.

In 1936, he assumed command of the destroyer HMCS Vancouver and was promoted to Commander later that year.

In 1937, Mainguy went to NHQ as the Director Naval Reserves. He took the RN Staff College Course in 1939.

On promotion to Captain in 1941, he was made Captain (D) Halifax and then Captain (D) Newfoundland. In 1942, he was appointed Commodore Commanding Newfoundland Force (CCNF), as an acting Commodore First Class. Later that year, he returned as a Captain to Naval Service Headquarters (NSHQ), serving as Chief of Naval Personnel.

In 1944, he assumed command of the cruiser HMCS Uganda. In 1946, on promotion to Commodore, he became Commanding Officer Pacific Coast, as an acting Rear-Admiral. Promoted to substantive Rear-Admiral in 1947, he was named Flag Officer Atlantic Coast in 1948.

In 1949 Rear-Admiral Mainguy chaired a commission investigating several incidents of mass insubordination onboard RCN ships that year. The commission’s findings (known as the Mainguy Report) identified some of the root causes of the incidents, which often have been mislabeled as 'mutinies.’

He was promoted to his current rank in 1951. Vice-Admiral Mainguy returned to NSHQ in Ottawa as Chief of the Naval Staff. He served in this position until he retired in 1956.