Rear-Admiral William Moss Landymore was the 12th Commander of the Canadian Navy. 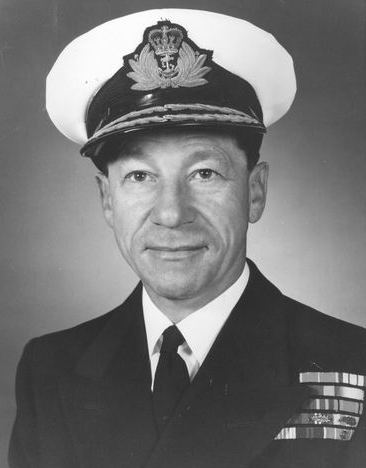 He returned to Canada in 1940, serving with HMCS Fraser and HMCS Margaree.

In 1942, he specialized in gunnery, taking the RN Long Gunnery course at HMS Excellent. In 1943, he went to HMS Grenville. He went to Naval Service Headquarters (NSHQ) in Ottawa in 1944, as Director of Warfare and Training.

Later in 1944, he returned to sea in the cruiser HMCS Uganda.

In 1945, he returned to NSHQ as Staff Gunnery Officer. In 1946, he became Deputy Director of Weapons and Tactics.

In 1949, he was promoted to Commander. The next year, he was appointed Director of Manning and Personnel Statistics at NSHQ.

In 1951, Landymore assumed command of the destroyer HMCS Iroquois for Korean War service. Later, he was made Commander Canadian Destroyers Far East.

Promoted to Captain in 1953, he studied at the Imperial Defence College in Britain. In 1955, he returned to NSHQ as Director Naval Plans and Operations. In 1957, he joined the staff of the NSHQ Legal Officer.

In 1958, he assumed command of the aircraft carrier HMCS Bonaventure. On promotion to Commodore in 1959, he became Chief of Staff to Flag Officer Atlantic Coast (FOAC). He was then named Senior Canadian Officer Afloat Atlantic in 1962.

He was promoted to his current rank in 1962. Rear-Admiral Landymore was appointed Flag Officer Pacific Coast (FOPC) in Esquimalt, British Columbia. In 1964, he became Flag Officer Atlantic Coast in Halifax, Nova Scotia.

In January 1966, he became the first Commander Maritime Command. He served in this position he was encouraged to retire early in July 1966. He disagreed with the Minister of National Defence on whether to continue the traditional naval identity.