Vice-Admiral George Clarence Jones was the 4th Commander of the Canadian Navy. 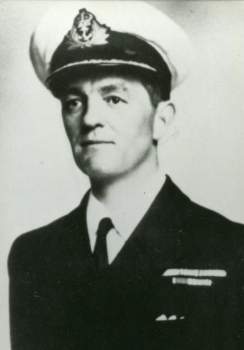 Vice-Admiral Jones joined the Royal Canadian Navy (RCN) as a Cadet in 1911. He attended the First Term of the Royal Naval College of Canada (RNCC). From 1913 to 1920, he trained with the Royal Navy (RN) in:

He also trained on shore at the “stone frigate” HMS Excellent.

In 1917, Jones was named First Lieutenant (Executive Officer) of HMS Vanquisher. In 1918, he served in HMS Wallington and HMS Leander.

In 1920, he assumed command of the destroyer HMCS Patrician. In 1922, he took command of her sister, HMCS Patriot.

Promoted to Commander in 1929, Jones was appointed Commander-in-Charge Halifax. In 1932, he assumed command of the destroyer HMCS Skeena. In 1934, he was named Commanding Officer RCN Barracks Naden in Esquimalt, British Columbia. He became Director Naval Operations and Training at NHQ in 1936.

In 1940, he was appointed Commanding Officer Atlantic Coast (COAC). He then was promoted to Rear-Admiral in 1941, remaining as COAC. In 1942, he became Vice Chief of the Naval Staff at Naval Services Headquarters (NSHQ) in Ottawa.

On promotion to his current rank in 1944, Vice-Admiral Jones was appointed Chief of the Naval Staff. He served in this position until his untimely death in February 1946.